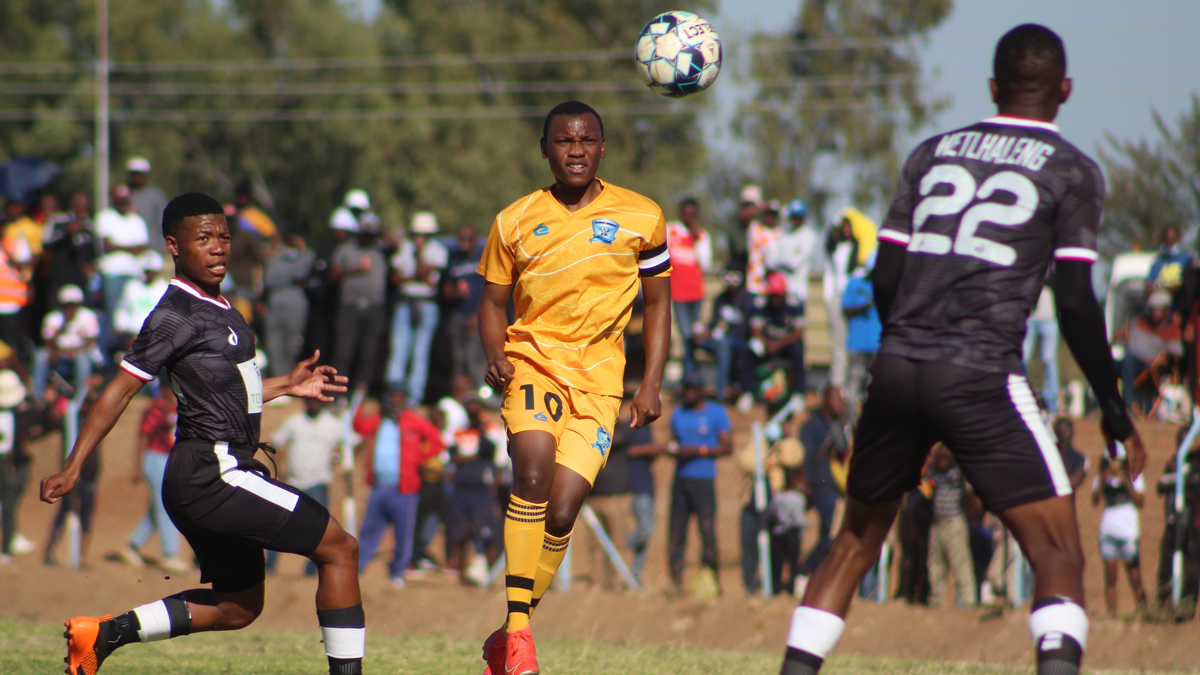 On a day in which Devils reared their ugly heads in the crowd, Angels ruled supreme on the pitch, crushing Mochudi Centre Chiefs with their beautiful, fearless football.

Sadly though, for all their heroics, Eleven Angels’ promotion to the Premier League, the incredible culmination of a 12-year journey, sealed in stunning fashion with a devastating 5-0 defeat of Chiefs, will forever be tainted by the violence that broke out off the field.

Perhaps the biggest miracle of the day was that no one was seriously injured as fans in the main stand hurled beer bottles and rocks at each other in a frenzied, drunken fury that left little regard for the women and children in their midst.

The trouble erupted in the 20th minute, when, after an even, tense start to the match, Angels took the lead through a Desmond Mtokufa penalty.

In the wild celebrations that followed, much beer was spilled as the home fans jumped for joy. Delight quickly turned to terror, however, as emotions boiled over and the missile throwing began in earnest, a misbehaving minority causing the majority to run for cover.

Caught in the crossfire, a mini stampede broke out as fans fled the fracas, many ending up squeezed against the barbed wire fence that surrounds the pitch.

Fortunately, a quick-thinking official averted disaster, opening the gate and allowing supporters to spill through to safety.

It took a good 50 minutes to restore calm, in which time Angels sought refuge in the dressing room while Magosi players sat patiently on the pitch.

Once peace returned, the sight of armed soldiers helping hurry the process along, the ill-feeling was seemingly forgotten as quickly as it started.

It marked a miserable blot on a historic sporting Saturday in Ghetto, as thousands packed into the Old Francistown Stadium for take two of Chiefs versus Angels.

The first leg finished goalless and another close encounter was expected in the second city.

Certainly, in the opening exchanges there was little to hint at the chaos to come, neither side able to exert any control.

That all changed when Chiefs centre back, Arnold Mampori, was adjudged to have tripped Monty Enosa in the box, Mtokufa holding his nerve to smash home the resultant spot-kick.

From that moment, Angels never looked back, ruthlessly taking charge when play resumed an hour later.

The Kgatleng giants were undone from another corner four minutes later, this time low from the right, Mtokufa nipping in at the near post to nudge the ball past Letshelea. The Chiefs shot-stopper will feel he should have done better with both set-pieces.

Stunned, the southern side tried valiantly to rescue their season, Coach Thatayaone Tebele ringing the changes with two double substitutions.

It was too little, too late. Indeed, although Chiefs came out fighting in the second half, Angels were solid at the back and carried a threat on the counter.

It was one such breakaway that led to the killer fourth goal, the excellent Enosa, who is still just 18, racing through on the left, rounding the goalkeeper and putting the game to bed in the 76th minute.

Incredibly, moments later it was five, Fungai Muzila saving the best for last, his spectacular long range effort looping into the goal to put Angels in heaven.

For a Chiefs side who had conceded just ten times in 23 league fixtures (including the play-off) going into the second-leg, the annihilation was complete. Credit to their fans, who stayed and sung their support to the bitter end, a moving contrast to the unsavoury scenes of earlier. The four-time BPL champions will now endure a fourth year in the second tier.

Angels’ promotion means Francistown will once again have representation in the elite league. It also hands Tafic a lifeline; Matjimenyenga will meet the runners-up in the regional play-offs as they seek to preserve their Division One status.

Under the guidance of the impressive Seemo Mpatane, and boasting some of the most exciting young talent in the country, Angels story is just beginning; the next chapter is sure to be thrilling!