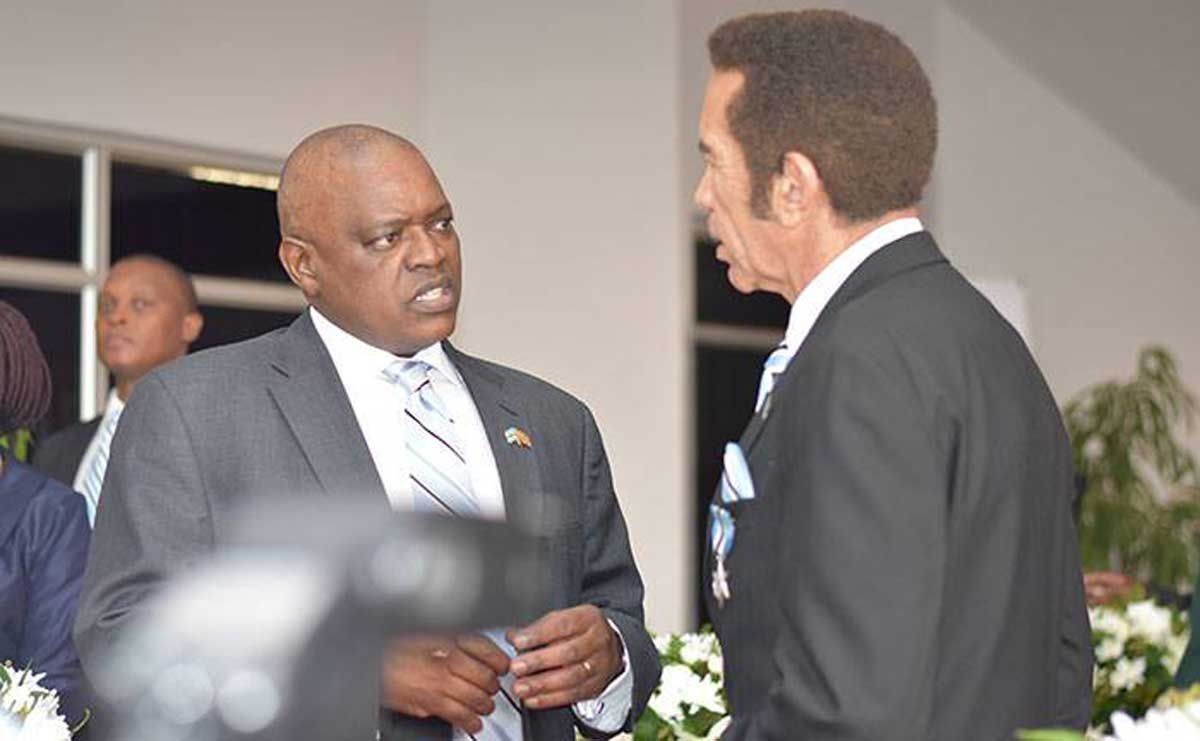 There is a powerful African proverb that says, “When elephants fight, the grass gets trampled.”

The proverb fittingly describes the unfortunate situation in Botswana were acrimonious differences between former President Ian Khama and his successor President Mokgweetsi Masisi have boiled over and threaten the country’s social and political stability.

True to the African proverb,   when powerful forces go to war, it is their people, the innocent ones who never asked for the conflict in the first place who get caught and are hurt and killed in the crossfire.

Botswana Forum for Action and Reform (B-FAR) calls for the immediate end to the protracted feud between former President Khama and sitting President Masisi. The presidential belligerence has not only stolen the focus from pertinent national challenges like, “the worrisome levels of social risks, especially inequality, poverty and unemployment,” but is also tarnishing the good name of the country in the eyes of the global community.  The county has hitherto been extolled as a shining example of liberal democracy, good governance, and a hopeful model for Africa but the enmity between the two is fast eroding this hope.

As head of state and government, as well as the commander-in-chief of the armed forces, according to the Constitution of Botswana, the buck stops with President Masisi to ensure national harmony, peace and security. The president holds executive power of Botswana and we remind him that when he took the oath of office he pledged to serve the country, “I wish and hasten to remind all victors, regardless of political affiliation, that our duty is to serve the interests of Botswana and Batswana without fear or favour.”

In his acceptance speech, President Masisi pledged to relentlessly uphold the rule of law, “I would like to reiterate that I am committed to the rule of law in this country, so as to enhance confidence and send a message to all of us that the law must be abided or face consequences of non-compliance.” We therefore call on the president to take firm and decisive action to ensure the safety and security of Batswana from external or internal threats. Failure to do so will be nothing short of an abdication of his presidential responsibilities.

We agree with the recent Bertelsmann Stiftung’s Transformation Index (BTI Transformation Index) that, “The public dispute between President Masisi and Ian Khama, presents a serious threat to the country’s economic, political and social stability.” As committed nationalists, we refuse to sit idle while the needless differences between a sitting president and his predecessor hold the country’s development at ransom.

In like manner, we call on former President Khama to desist from his meddlesome attempts to rule this country from the grave. He has served two terms as president of the Republic without interference from his predecessors and must respect our Constitution and subject himself to it. We remind him that he is the architect of much of the myriad of the socio-economic and political morass we currently find ourselves in. The former president is fanning tribalism and division. It is utterly dangerous to combine tribal issues with partisan politics as he is carelessly doing. It is exploitation of Bangwato to camouflage a few loyalists and political supporters as representatives of the tribe, and an abuse of the Serowe kgotla to settle personal political scores.

Truth be told, his battle is personal, vindictive and is driven by a high level of vendetta, so much that he cares little to drag any willing soul into it. Great leaders fought to the end and in sacrifice to free their people, instead he uses anything and anyone to achieve his personal goal of ousting a sitting president even at the cost of national peace and stability. He attacks the country with the same vile as he attacks the sitting president. His claims to ‘save’ the people from dictatorship, poor governance etc, are ludicrous for he created and perfected the system. We need to be saved from him, not by him. We demand that the former president disentangles himself from the political fabric of the country and allows elected citizens to do their work. He has caused enough damage already.

It is regrettable that both men fail the statesman appraisal on this matter and go on to rebuffed mediation attempts by both political and traditional leadership. This brings into question their country first patriotic ethos. Conversely, we also observe some opportunistic and inflammatory maneuvers from across the political divide that are fanning the flames of this irrational conflict for political mileage. We urge Batswana to be vigilant and not allow themselves to be used as cannon fodder in this futile strife. Batswana must jealously guard the founding democratic values and principles of this proud, tolerant and inclusive nation. Any political leader who preaches disunity of Botswana must be shunned and treated with absolute disdain.

B-FAR demands an immediate end to this vain rivalry and calls on citizens, other civic organizations, the church and political formations to exert pressure on former President Khama and sitting President Masisi to resolve their differences and refocus their energies on the socio-economic challenges besieging the country.