Duo save cousin from axe-wielding ex-boyfriend

Two young men have been hailed Christmas Heroes after putting their bodies on the line to save their cousin from an axe-wielding ex-boyfriend with murder on his mind.

Deep in the dense bush that divides Matsiloje and Matopi, Masego Nkaniyabo, 31, and Itireleng Boitsano, 22, are recuperating at their homestead, nursing the injuries they sustained on Thursday 16 December: a night of blood and death.

If it wasn’t for the brave duo, 32-year-old Maria Ndu would almost certainly have been hacked to death, the latest GBV statistic in an ever growing list of passion killings.

The man who reportedly tried to kill her, her lover of eight years and the father of her four-year-old daughter, Modimokgosi Channel Keotswetse, was found hanging from a tree the following morning.

The long-time couple only broke up last month.

“The reason we separated is that he had found a piece job. When he got paid, I asked him to give me some money and he refused saying it is over, he does not want a woman who loves money,” Ndu tells The Voice in an exclusive interview on Monday, four days after death came to her door.

According to Ndu, who has a faint bruise around a black eye from a blow she says Keotswetse previously dished out, her baby daddy came crawling back begging to rekindle the relationship when his cash ran out.

“I refused. So he started following me around even at the bars and insulting me. Just two weeks back he assaulted me and I reported to the police. Our case was supposed to be heard last week Thursday, the day he was found hanging,” says Ndu, adding she is still struggling to understand what happened.

“For eight years he was a good, kind boyfriend. I don’t know what turned him into a monster!”

It seems the conflict came to a head last Wednesday, when Keotswetse cornered Ndu and their daughter harvesting morogo in the bush.

“He told me I reported him to be arrested and I explained I only want him to be beaten so he changes for the better. He started beating me and as I tried to run he took a brick and removed a knife,” narrates Ndu, her voice barely above a whisper as her cousins strain to listen.

“Upon seeing the knife, I relaxed and tried to calm him down. He indicated he has to kill me because he already threatened me with a knife. I told him we should go home and solve our issues. Thank God he listened. We went home, that is when I secretly tipped off my daughter to go and alert the Village Chief.”

Showing incredible steel, well aware that her life may be hanging in the balance, Ndu calmly engaged Keotswetse in small talk at home. A little later, Nkaniyabo turned up, telling the couple the chief wanted to see them.

“When we got there, Channel informed the Chief he has a demon possessing him to kill a person. Then he managed to dodge everyone and quietly left the kgotla without anyone noticing.”

Fearing for their cousin’s life, Nkaniyabo and Boitsano volunteered to watch over her.

They set up camp by the door of Ndu’s one-roomed house, laying their mattresses in the yard and lying in wait for the intruder to make his move.

However, as the hours ticked by, the late night took its toll and the pair fell asleep.

Thus, at around 2am when Keotswetse finally turned up, both men were snoring soundly and unable to defend themselves from his attack.

“I just remember preparing our blankets to sleep only to wake up at the clinic. I guess I was dead; as you can see he stabbed me two times with a screwdriver between the throat and neck. The other strike stabbed me under the tongue,” says Nkaniyabo, struggling to speak with a bandage on the throat.

Taking control of the story, the younger cousin, Boitsano, said he awoke feeling dizzy. As he slowly came to his senses, he realised the mattress was soaked with blood.

“I knew Channel was here and tried to stand up. He beat me with an axe on the legs and I fell down. When I touched my neck, as it was in pain, blood started oozing as he had already cut me in my sleep. Then I looked at Nkaniyabo’s side and saw his eyes wide open, his body red with blood. I thought he was dead!”

With one defender out cold and the other lying in helpless horror screaming for help, Keotswetse moved passed the two men and into the house. 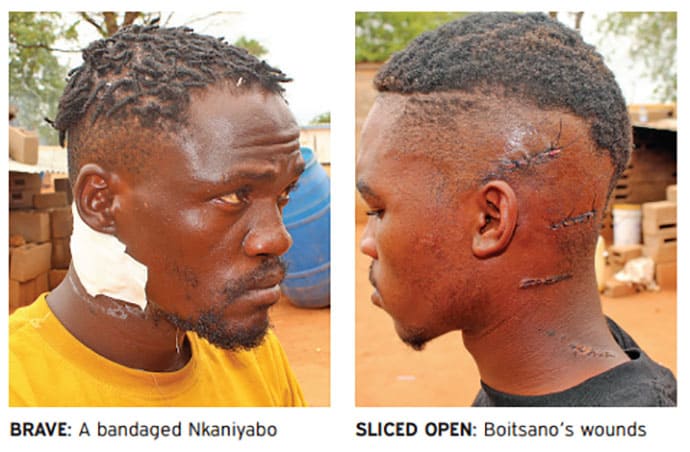 Alerted by the commotion outside, Ndu was ready and able to fight off her former boyfriend. In the life-and-death struggle that ensued, Keotswetse lost control of the axe and it fell harmlessly to the ground.

Sensing his time was up, with neighbours alerted to the scene by the noise, Keotswetse fled into the night.

His lifeless body was found a few hours later, discovered by a villager who had gone into the bush to use the toilet. He will be buried at Robelela village, some 20 km from Matopi, over the weekend.

“Although we nearly died, we are proud to have saved our sister’s life,” conclude the Christmas heroes, gazing at Ndu with fierce affection.

Relived to escape without serious injury, the young mother says she will be forever grateful to both men for saving her life.

“I deeply love my cousins and I will take care of them until they get better. They risked their lives for me. The blunt axe that was used also saved their life and if I was not a strong person, Channel could have killed me.”

Meanwhile, when reached for comment, Matopi Investigating Officer, Constable Isichwala Jotia confirmed they are investigating a case in which a Robelela man committed suicide.

“Before he died we were looking for him for two cases of unlawful wounding. The day he was found hanging, he was supposed to be arraigned and prosecuted before Matopi Customary Court for assaulting his girlfriend,” concluded the top cop, who advised couples to seek help when they are experiencing relationship problems.

Related Topics:Front Page
Up Next

A year of abuse