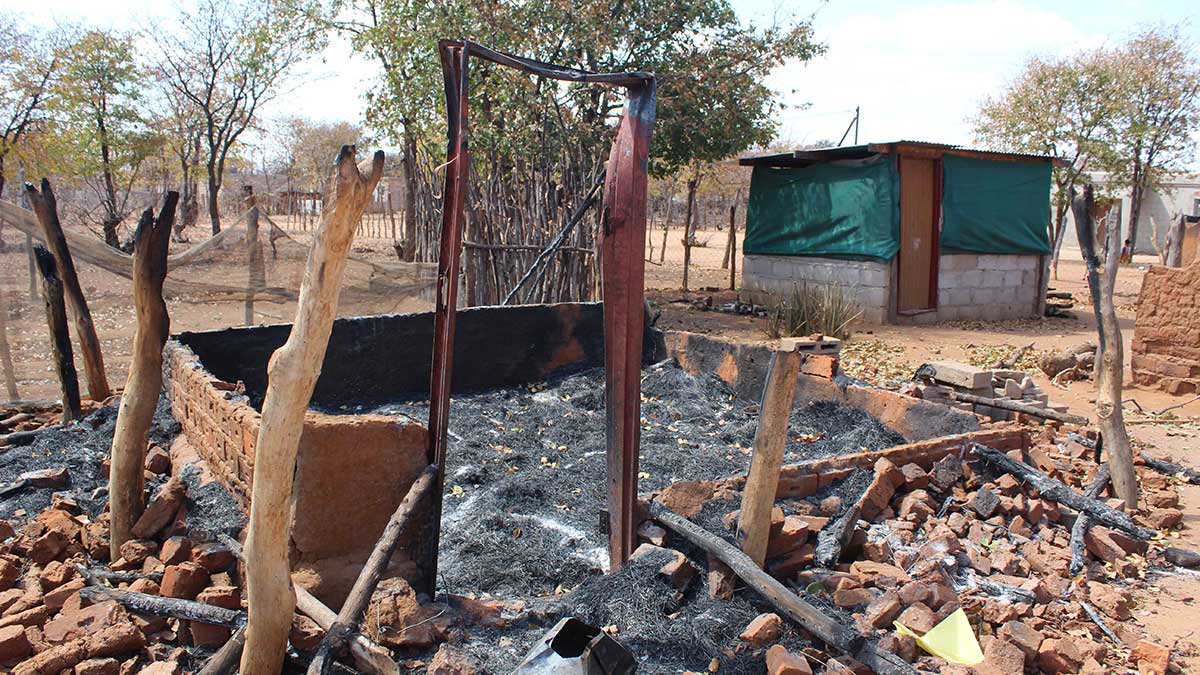 BURNT DOWN: One of the huts

It has been over two weeks of hell for the Wililani family of Mengwe ward in Maitengwe as mystery fires have been breaking out in their homesteads and burning down everything in their path.

The first fire broke out last Tuesday with the raging inferno licking the thatched house in minutes, burning it to the ground.

“Fortunately, the eight kids who were sleeping in the house escaped unscathed,” said the owner of the yard, and mother to some of the kids, 46-year-old Lebesani Wililani.

The distraught mother told The Voice that while they were still scratching their heads failing to find answers as to what could have caused the fire, the inferno returned three days later on Friday, erupting on a roundavel in the adjacent yard belonging to Wililani’s younger brother, Gobusamang Wililani.

“We acted swiftly and managed to put out the fire,” she said, but it was only a short reprieve as the flames erupted a few hours later. The family, through the help of neighbours, once again sprang into action and doused the flames. 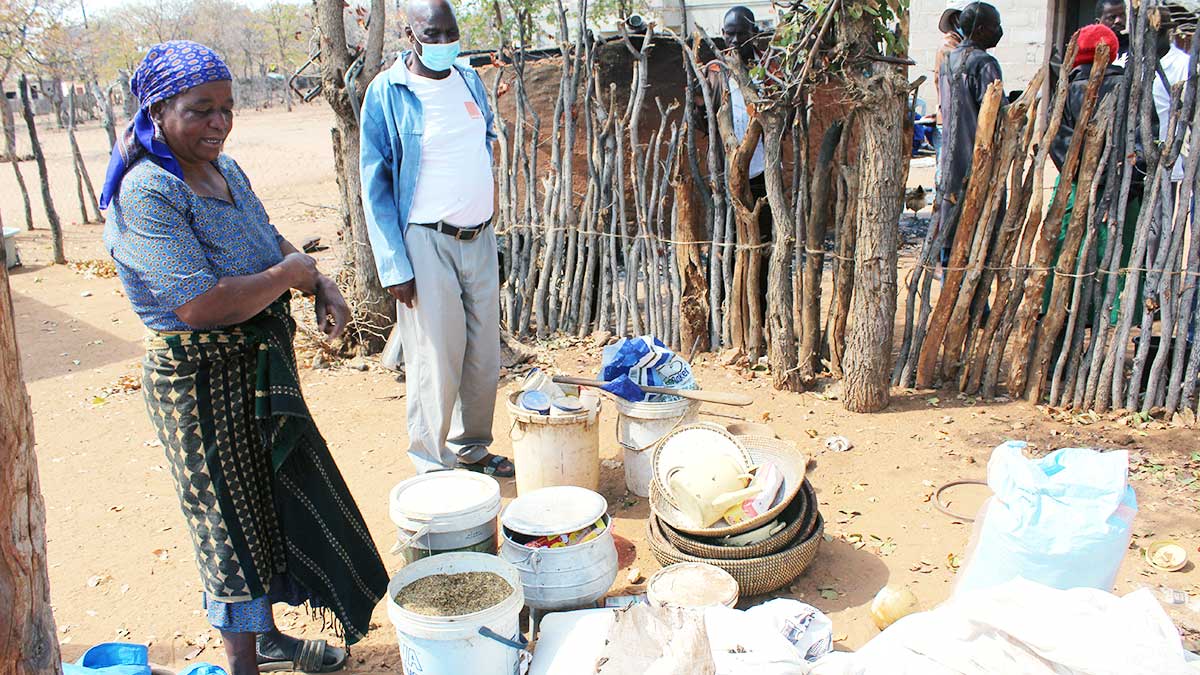 The determined raging inferno, seemingly with a mind of its own, was, however, not done yet.

It returned for the third time and finally burnt the house to the ground.

On Sunday, the mysterious fire burnt down a third hut in the same yard, this time giving the family no chance to save anything.

A spiritual healer herself, Wililani admitted to The Voice that the fire is one of the strangest occurrences she has ever witnessed.

“It was the hottest fire ever. There’s absolutely nothing I can do,” she said meekly.

An 82-year-old uncle to the two siblings, Motlhasedi Sitobe, told The Voice that with all the thatched houses burnt down, the fire targeted household items inside the two bedroom brick house.

“Even the chicken house did not escape the fire. An incubating hen has lost half of its feathers, it’s a miracle it’s still alive,” said Sitobe.

The old man said realising that the fire was targeting items still in the house, the family decided to remove all their belongings from the houses and bundled them together at the centre of the yard.

“Even that did not help. Mattresses caught fire in the middle of the yard, a bucket also melted and exploded into flames. That pile of clothes over there caught fire two times this morning,” he said gesturing with his hands.

Now with all their belongings a hot mess at the centre of the yard, the family spend their nights out in the open as no one wants to set foot in the house.

“Our biggest challenge right now is that we have 10 school going kids who’ve lost all their books and school uniforms. One of them is supposed to sit for her Junior Certificate Examination (JCE),” said Sitobe. 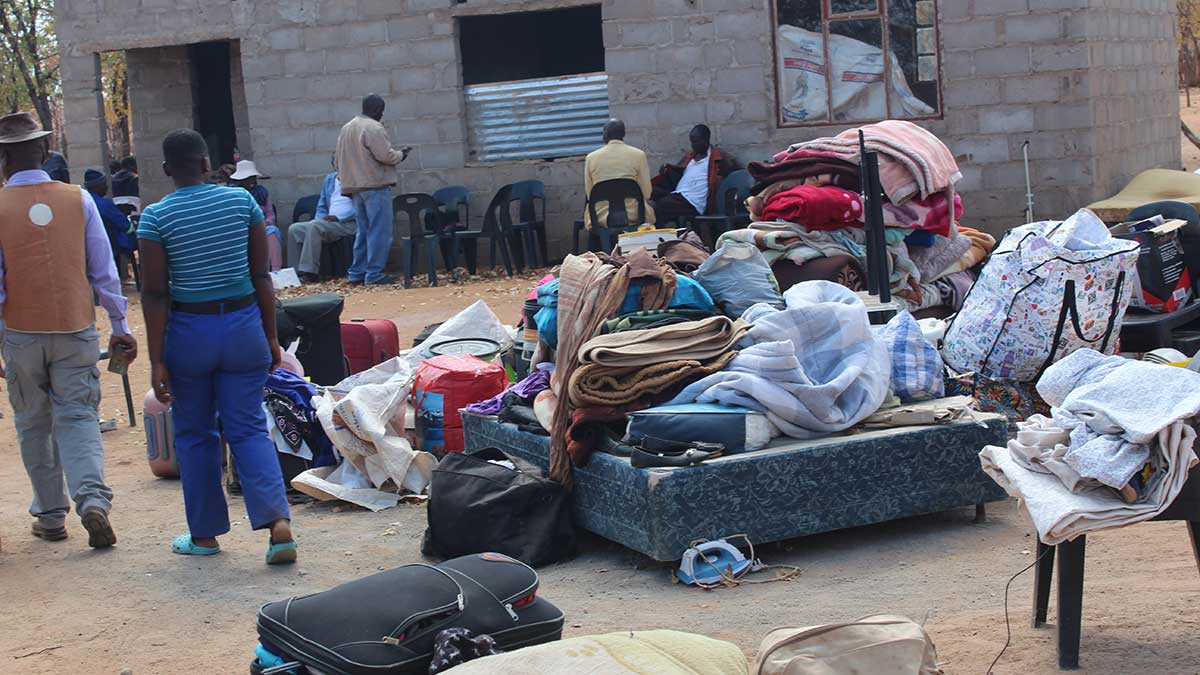 OUT IN THE OPEN: Family’s belongings

He further said the family will be sleeping out in the open for a while as there’s very little anybody can do.

“If you give us tents, they’ll go up in flames,” he said in defeat.

The old timer said they’re ready for any spiritual assistance from prophets, pastors even traditional doctors.

“At this moment, we can’t be too choosy. Anything that can help the family get rid of these fires is welcome,” he said.

In an interview with The Voice, Maitengwe village Chief, Kgosi Shadrach Mphala-Mengwe, said the mystery fires were a first of its kind in his village.

“We’re planning to hold prayers for the family and we’re also working hand in hand with the social workers who have already assessed the situation,” Mengwe said.

Afraid to sleep in their houses, or even wear their blankets, the Wililani family has now been left to the mercy of the harsh cold nights, and the hot summer days.