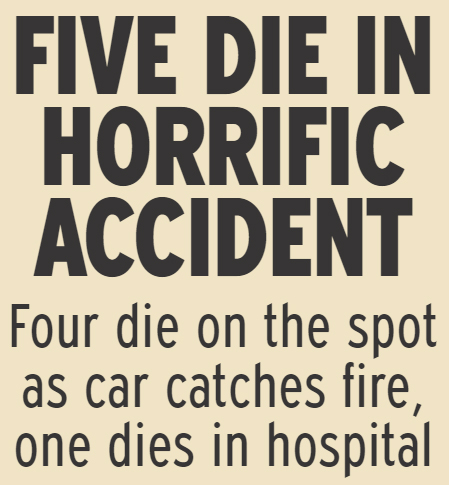 • Four die on the spot as car catches fire, one dies in hospital

The Botswana Police Service (BPS) is currently working around the clock to identify four people who died after their vehicle caught fire after a head-on collision.

The accident happened a few kilometres before Moshupa village on Tuesday (24th May) at around 15:30 PM.

On Wednesday another person involved in the accident also died at the hospital raising the death toll to five.

Senior Superintendent district CID officer, Ranchi Olebile told The Voice in an interview that police are currently handling a matter in which two vehicles collided along the Moshupa/Thamaga road. He said that one of the vehicles which was travelling towards Moshopa/Kanye area caught fire, killing the four passengers who were at that point trapped inside the vehicle.

According to the Police a fifth person, a 54-year-old woman who was at the time of the accident an occupant of another vehicle which did not catch fire, died the following day (Wednesday) at hospital.

“Another passenger in the car, which did not catch fire , a man is currently recuperating at Princess Marina Hospital. We have currently not yet identified the deceased in the car that caught fire but we have engaged our counterparts to use the vehicle information to identify the owner,” the police said.

The police are appealing to members of the public whose family members have not arrived at their destinations to get in touch with them.

In this article:Moshupa/Thamaga road, Road Accident 2019 Sports Person of the Year Baboloki Thebe and 400m Sprinter Onkabetse Nkobolo survived a car accident this morning at around 220hrs near Trekkers... Road accident victims, Zvitendo Malebogo Svikwa and his wife Tshepiso Bridget Tlhomamisang-Svikwa were laid to rest side by side in an emotional send off...