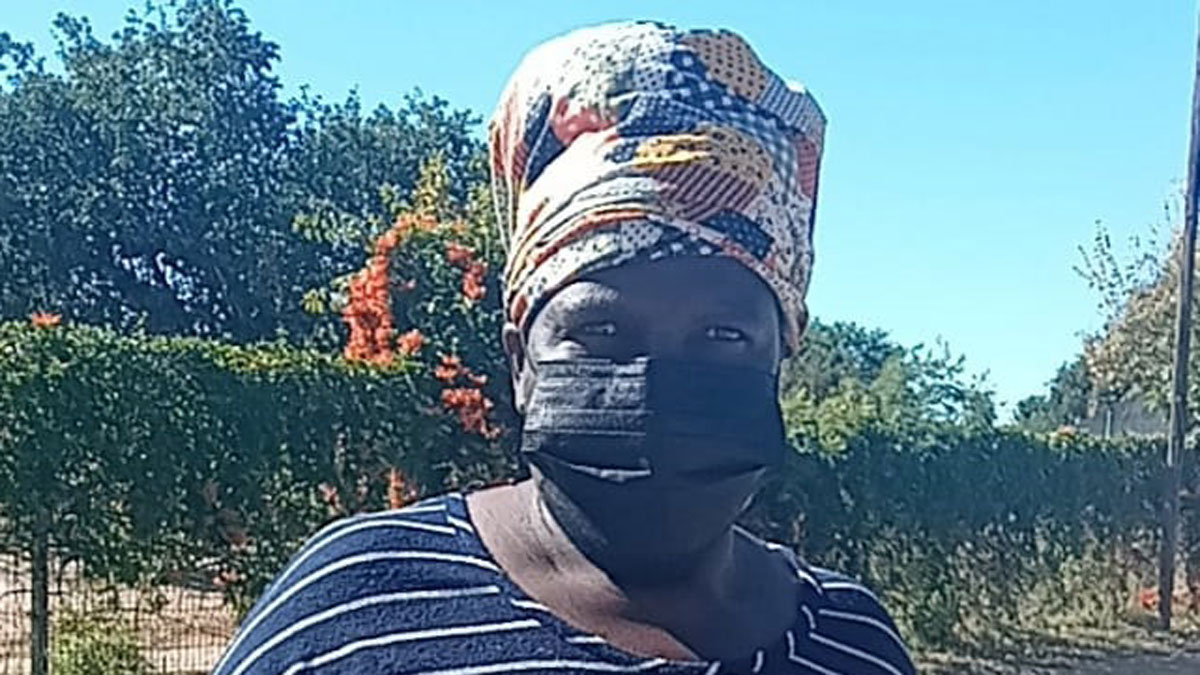 “It is unfortunate that African traditional healing practices are frowned upon, at times the subject of much ridicule, compared with western methods or modern medicine. Ask yourself this simple question: how did Batswana or Africans live pre-colonisation … When someone sprained an ankle or fractured a limb, how do you suppose they were healed?”

These are the rhetorical questions of 56-year-old Martha Serowe David, a healing massage therapist in the capital’s locality of Bontleng. Many of our fellow Batswana are proficient in the area of traditional healing and indigenous medicine, and the best healers are those whose knowledge was transferred from generation to generation, this indigenous knowledge they ensure to keep in the family.

Martha has mastered this craft and has managed to build a devoted body of client.

Her gifted hands don’t only energise but heal, saving both limb and life, as well as restore marriages. Yeah, you read that right: FIX MARRIAGES! 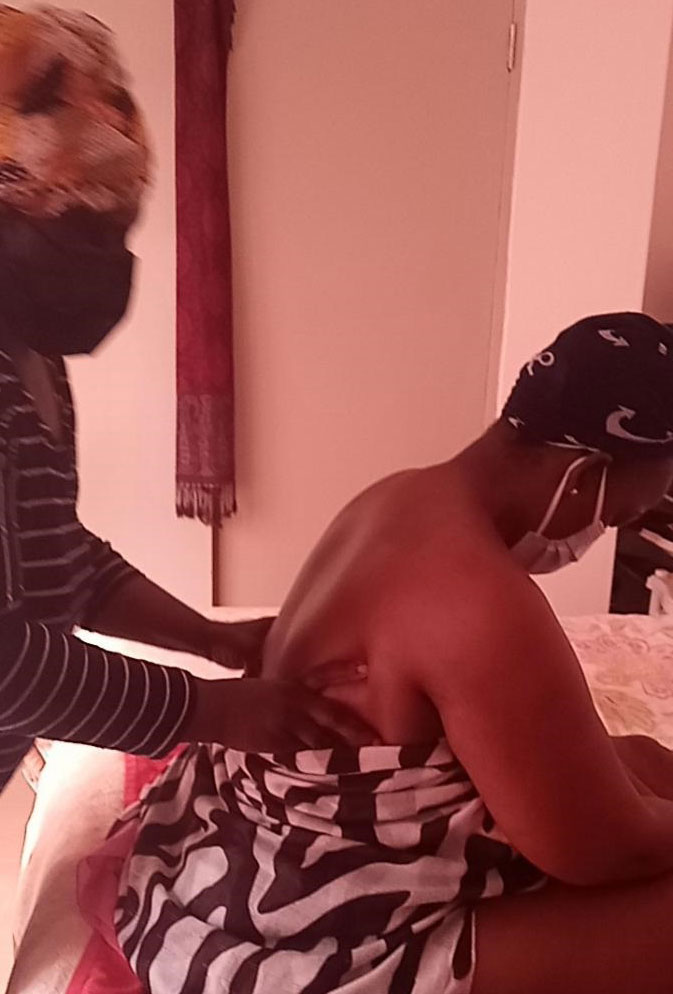 Voice Woman sits down with the skilled mother-of-eight to find out how she came to be the sought-after masseuse she is today, and what nuggets of wisdom she’ll share with aspirant traditional massage therapists.

As a chronic back pain and fatigue sufferer, yours truly also decided to put her westernised biases aside, after all, my maternal aunt was a traditional midwife and doula. My dad’s departed first cousin, too, ‘Maswabi wa ko White City’, was a well-known ‘thobega’ (chiropractic care) specialist!

Born in Gabane but originally a Herero from Tsabong, the middle-aged masseuse says she began in 1995 after she had acquired sufficient knowledge to take over from her mother, who also learnt from Martha’s grandmother.

“I had always been keen to learn. I’d say I started at a much younger age when, as a young girl, I’d sit close to mum and observe her treating patients. I was so inquisitive and I must have exhausted her with my incessant questioning: ‘how do you know there are 2 babies in there? … how are you able to tell the baby’s gender?’”

In her 27 years massaging people from all walks of life, Martha – or Mma Emma as she is affectionately known – has helped pregnant women as massage therapy can help the unborn baby’s movements and ensure that labour is less excruciating and not prolonged for both mum and child.

“There are many benefits really; expectant mothers who want to avoid complications, late term, stitches or C-section come to see me. Because they cannot lie prone, I massage them while they’re seated – on the back, shoulders, arms and legs – for better blood circulation, relaxation, relief and general wellness. Some women might think they struggle with infertility, but when they come for a few sessions, they manage to conceive. It’s merely an issue of popelo (womb),” she says, adding that usually she focuses on several trigger points to massage the womb back into position.

Unlike her mother, who offered other techniques because she helped expectant mothers, Martha doesn’t offer birthing assistance, as she’s a bit squeamish.

She says for close to a decade before her mum died in 2012, health officials had asked her mum to suspend her services.

“In 2001, my mum discontinued home births. As you know, it was at the height of the AIDS pandemic and Bontleng Clinic nurses advised her against it. However, she’d later, despite the stern warnings, occasionally assist very desperate clients who trusted her hands. My mum was brave. There were times when a baby would be quiet after delivery and I’d be scared that it was a stillbirth. I’d watch her gently spank the newborn on the side of the bum and it’d cry out in response to her. I swore that I’d never deliver babies!”

In the last 27 years, Martha has treated many people, from car crash victims to people living with disability or chronic diseases like stroke, arthritis, migraines or spinal cord injury.

“I remember I helped a Professor at UB, who had a spine problem. I’d visit him at Princess Marina Hospital to massage him there. Once done, other patients in the ward would ask me to help them as well. Other high profile clients include the late former president, Masire, and some ambassadors.”

Martha, who also does home visits, says she has never advertised her services; every new client she sees comes from referrals.

“There’s one stroke victim, a Spiritual Church member. He only did 3 sessions and was healed. You have to understand that blood vessels are interconnected; therefore I know which pressure points to target. Major vessels in the body need to be kneaded in order to relax them; tendons and ligaments, too. My mother taught me that there’s a V-shape in between the shoulder blades, which becomes tense due to stress, therefore I have to apply pressure but be careful not to press too much on the spine itself. Stress can be a result of life’s challenges and a lot of people are faced with adversity right now. Hence the Seventh Day Adventists also engaged me for their wellness retreats. Other times patients call me from their hospital beds, that’s why I’m always busy: word of mouth!”

Some of Martha’s patients include infants who suffer from phogwana, sickly children with developmental delay.

Further, she helps University of Botswana students: “I always advise them to use contraceptives because my massages ‘open up’ the reproductive system. Just go on Facebook and enquire about me, you’ll see so many testimonies!” she says, and with slight chuckle, continues, “There’s also erectile dysfunction victims; a lot of them on the verge of divorce. I ask them to bring their wives with them because, as you know, some men are weak. I want the wives to be present so they can behave. Some are Bakgatla, who are typically candid, so they tell people my massages ‘raise the dead’! All they bring is Vaseline.”

Upon finishing my massage, Martha asked me to have a stretch, and I asked why.

“Massage and exercise go hand in hand because they’re both aid blood circulation,” she enlightens me, furthermore sharing the importance of using indigenous herbs and plant roots like mosokelatsebeng, sengaparile and even whole cloves which treat muscle cramps like period pains.

“I don’t subscribe to womb cleansing using invasive mixtures that people advertise nowadays, just boil whole cloves and drink. Even plants in your home, I see you love plants, they are all medicinal, you just have to consult a herbalist.”

Though she’s not the sole member of her family with this gift, she’s the only one currently practising full-time. She says her elder brother, sadly, only does it to support his habits – imbibing.

Her sister, a devout Christian and member of St. John church, like their mother, massages part-time in Gantsi where she works in a recruitment agency while two of her children are currently learning.

She concludes by explaining that although there’s an obvious reluctance by the health sector officials to recognise them, the Ministry of Health does invite traditional healing massage therapists to workshops through Dingaka Association.