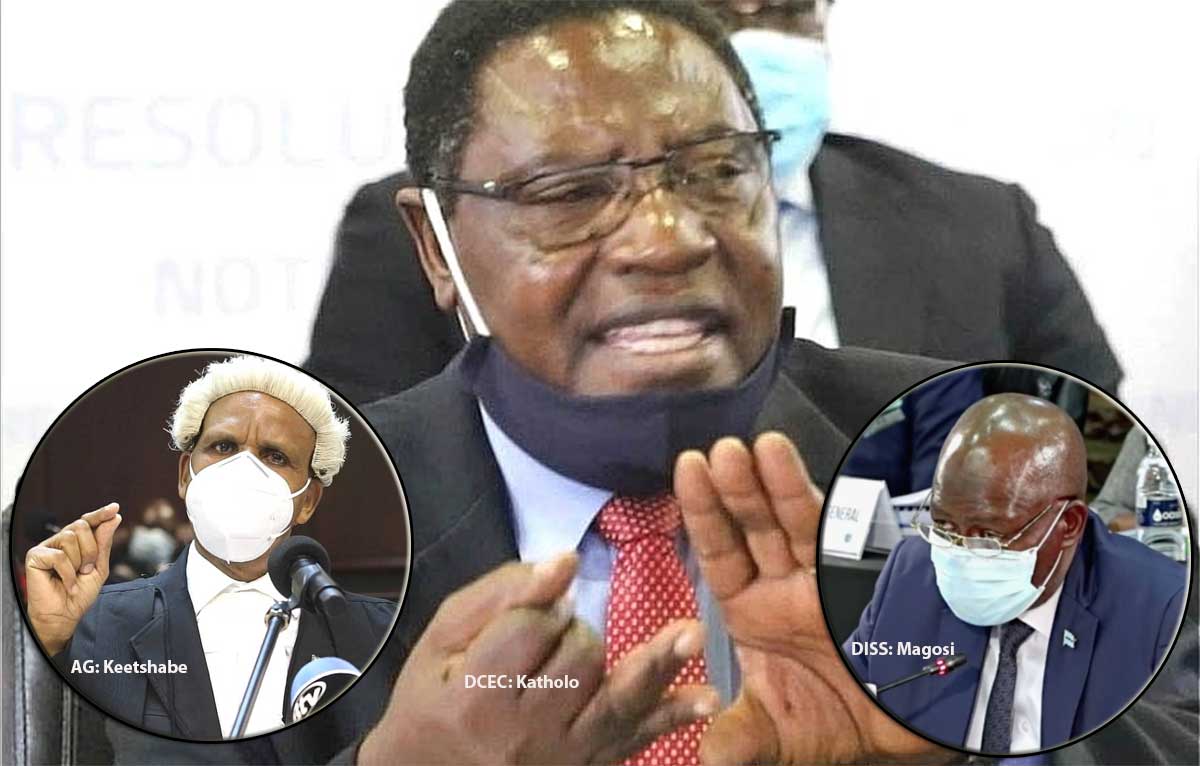 The apparent squabble between the Directorate of Intelligence and Security Services (DISS) and the Directorate on Corruption and Economic Crimes (DCEC), appears to be headed for a marathon legal battle.

In a court record circulating on social media over the weekend, and an affidavit deposed by DCEC Director General Tymon Katlholo, he says immediately after securing a Court Order last week, his efforts to have the DIS on board for peaceful and probably lawful resolution to their standoff, the DIS bolted and never showed up.

He said in the supplementary Founding Affidavit that his attorney served the court order to relevant authorities specifically the Attorney General’s Chambers, Botswana Police, Special Support Group Commander on May 9th.

The Order of May 9th was to the effect that; a Deputy Sheriff accompanied by DCEC Attorneys, representative from the AG Chambers, under escort of SSG shall attend at the offices of DCEC and take custody of the documents/dockets as demanded by DIS from two offices sealed as a crime scene.

The documents were to be deposited in Court and be held in custody of the Registrar of the High Court, “and be opened only by the Registrar or one of her Deputies, Deputy Sheriff of the Court, and in the presence of Monthe Marumo & Co Attorneys, and representatives of the AG,” the order reads in part.

Katlholo says in the affidavit that after communicating with all stakeholders, his attorneys, the Deputy Sheriff, the SSG and others showed up at the DCEC offices but only AG and DIS didn’t as they said they were still consulting on the Order.

He continued; “As it is clear the Respondent was all out to frustrate judicial process. I note with concern that from the events of the evening of 9th May 2022, it is clear that the Respondent never intended to comply with the Court Order or ensure the same is complied with”.

He argues that placement of the files in custody of the Registrar of the High Court will not in any way be prejudicial to the DIS or the AG.

Some of the dockets that DIS wants to access are an investigation into Seleka Springs, Mosu Developments and Airtstrip, Sebina Brothers, Butterfly Case, Unity Dow – Flying Mission School, and Unity Dow- Sychelles Students.

AG and DIS told Katlholo’s attorneys that they will disclose their reasons for not showing up when they meet in Court.

Reached for comment, DIS spokesperson Edward Robert said he has seen the circulating documents but could not confirm their authenticity.

“They appear to be referring to ongoing court records, and therefore we can’t comment on them”.

Director General of the DCEC Katlholo said he was not aware of the circulating documents but said there is a matter before the courts that involve DCEC and DIS and therefor he would prefer not to comment.