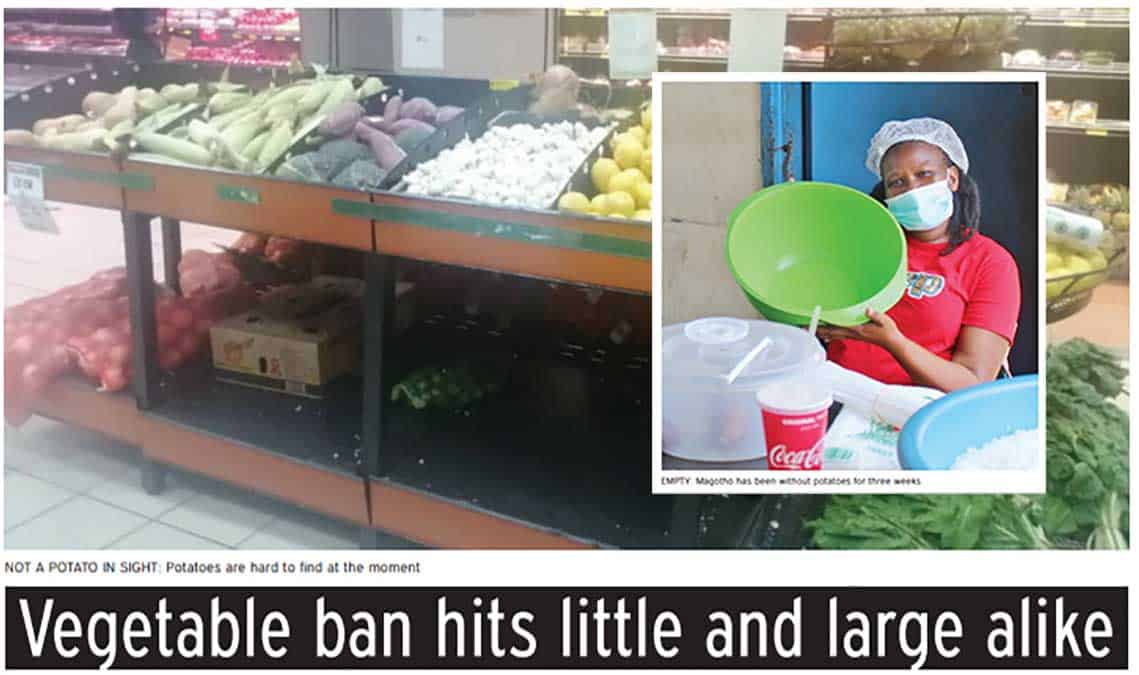 Just over a month into Botswana’s two-year ban on importing vegetables and the country is already facing a shortage of the green stuff.

From street sellers to leading retailers, the lack of veg has hit little and large alike.

The scarcity comes after government’s decision to prohibit fresh produce being brought into the country in an effort to promote local farmers. It was also hoped the P100 million Botswana forks out to its neighbours for vegetables every year (according to Statistics Botswana) would instead be pumped back into the local economy.

However, it seems local supply is already struggling to keep up with demand.

In a brief interview with Voice Money this week, the Branch Manager of Choppies Hoovernit in Francistown, Kagiso Sekoto revealed his store is running short of both potatoes and tomatoes.

“This ban has affected us badly. As I talk to you now, there are no potatoes in the shop and we are struggling with tomatoes; we can go for weeks without tomatoes on our shelves!” said Sekoto.

The shortage is a disaster for street vendors who make a living cooking and selling ‘ma-fresh’.

One such figure is Dintle Magotho, who has a small stall at Francistown Market preparing fresh chips. Without potatoes for three weeks now, she has been forced to find alternatives to keep her businesses running.

In the past, Magotho and her colleagues relied on a middle man, who would sell them cheaper stock from South Africa. With this route now closed, she has to buy frozen fries from the supermarkets to make her chips.

“I used to have someone who buys vegetables for me from South Africa at a cheaper price. Since they are not allowed to import such anymore, I am forced to buy frozen vegetables which are very expensive and reduce our profits to almost nothing,” laments the fed-up chip maker.

“Even local farmers have realised demand is high and so they sell the few potatoes they have at crazy prices. The big companies also buy from these farmers and obviously we can’t compete with them!”

Magotho further told Voice Money Pandamatenga Farms are still to harvest their crop while Ghanzi farmers, who produce most of the country’s potatoes, limit the number you can buy..

“As for now, people get their fresh vegetables from Phikwe. You can spend weeks their waiting in line for your turn to get assisted,” she grumbled.

Efforts to reach both the Ministry of Agriculture Development and Food Security and the Botswana Farmers Association proved unsuccessful as their phones rang unanswered.