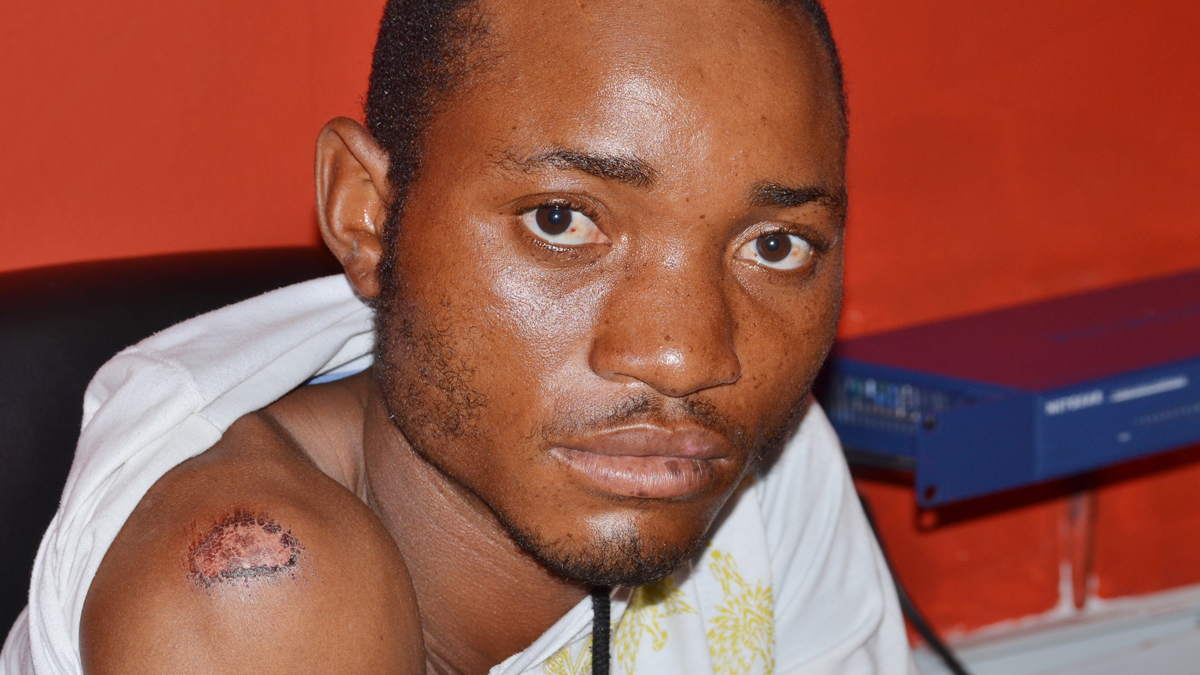 Humiliation, anger and pain is what the fruit vendor who was assaulted on the streets of Francistown on Monday is feeling.

Calvin Ngonya, 24, of Tsholotsho village in Zimbabwe is the man behind the circulating video that left many people on social media heartbroken.

In the video, Ngonya was captured half dressed and begging for his life from the people assaulting him. 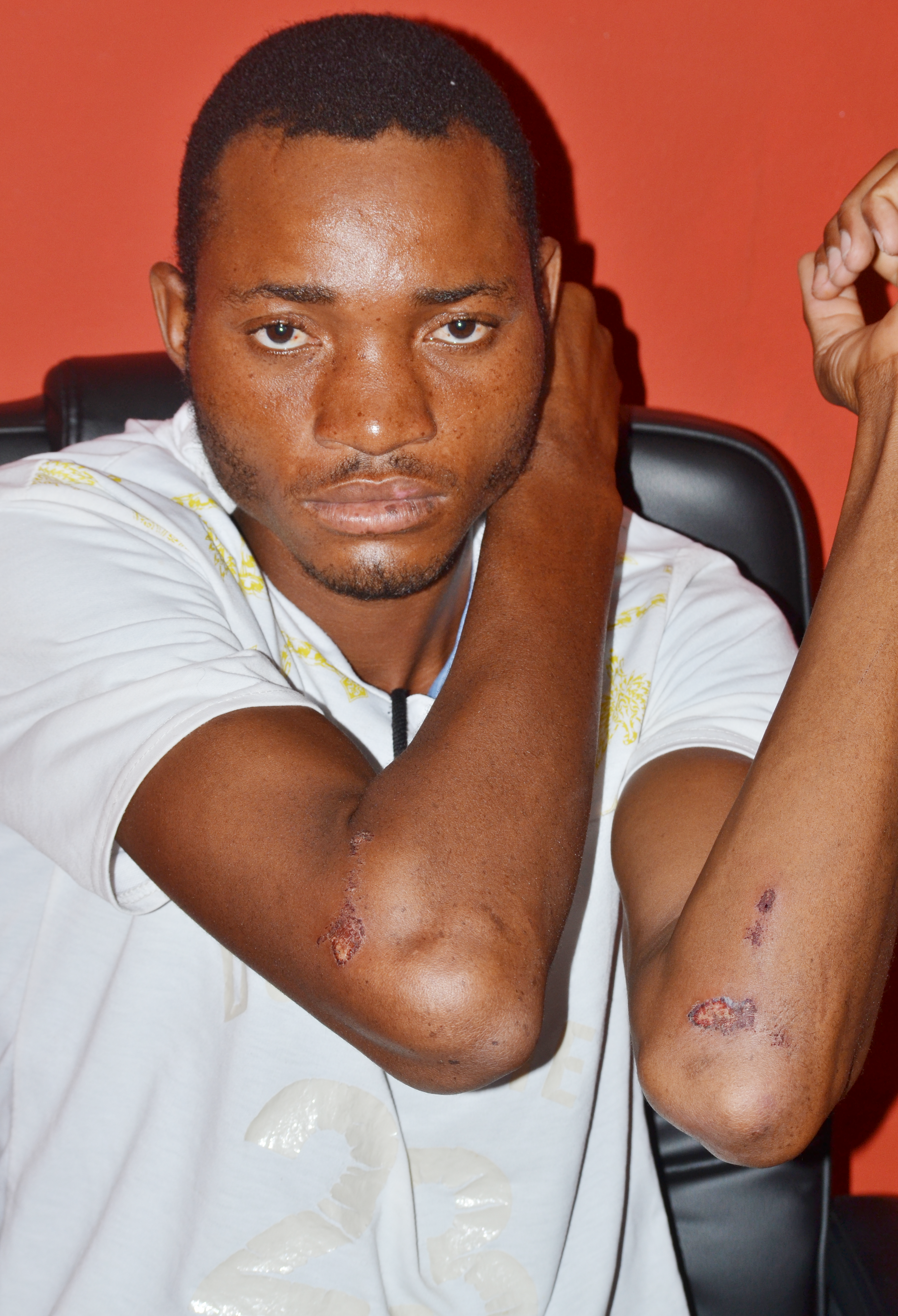 On Wednesday, The Voice located the young man who could hardly walk because of a swollen foot.

Carrying his left shoe which currently cannot fit because of the swollen foot, Ngonya, who also has a bloodshot eye limped into the Voice offices to relive the painful ordeal.

“The time was around 6 pm when I was selling my oranges behind Choppies store which is opposite the Magistrate Court when police officers grabbed me and ordered me to get in their car.

“They told me to quickly jump in so I don’t attract attention. That shocked me but I managed to escape, leaving them holding my jacket and top which I removed while breaking away from them,” revealed Ngonya who was in the company of his girlfriend.

He said the police wanted to arrest him for selling oranges on the road and as he knew that was against the law, he decided to run.

Little did he know that he had made a bad decision by fleeing. When people saw him running half naked, they pounced on him and started beating him up, he however managed to escape and ran to two security guards thinking they would protect him.

“To my horror and surprise the two guards slapped me, kicked me and I started asking for forgiveness as I did not know what to do. The thought of that day kills me, I was left in pain and humiliated as people were taking videos. Luckily a good Samaritan asked them to leave me alone and that is when I managed to walk to the taxis and a taxi man gave me a t-shirt to wear,” he said holding back his tears.

He sustained bruises on the elbows, knee, ankles, left shoulder and his foot is swollen.

Ngonya who survives by selling oranges says he has a daughter to look after back home.

He indicated that he barely sleeps since that day as he keeps seeing those people in his sleep.

The thought of going to the clinic and to the police to lodge his case was the last thing to cross his mind as he feared that since he is an illegal immigrant he won’t be assisted, but would instead be arrested for entering the country illegally.

“When I get better, I will make sure those security officers who assaulted me pay for causing me physical and emotional distress.I wish their bosses can read this article and fire them because what they did is inhuman. Instead of asking what was happening they just attacked me,” he said.

Ngonya’s girlfriend, Memory Mavungani, 25, who is also a fruit vendor, said what happened to his boyfriend is sad and unfortunate. 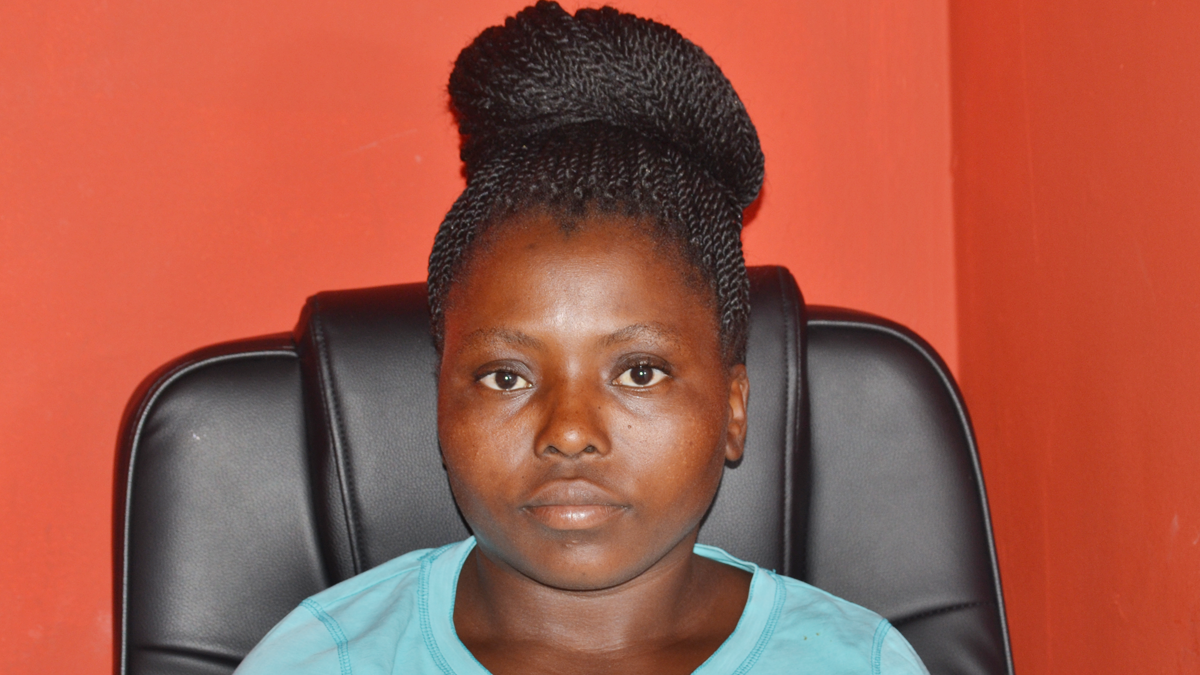 “How do people just assault another human being for no reason,” she rhetorically asked.

When reached for comment, Central police station boss, Assistant Superintendent Douglas Khumalo confirmed to have seen the trending video and indicated that they have been waiting for the beaten man to come and report his matter to the police.

“We have been waiting for him and since you saw him please talk to him to come to us. He is a human being and has to be treated with dignity. He has to open a case so that those who assaulted him can be charged,” said Khumalo. 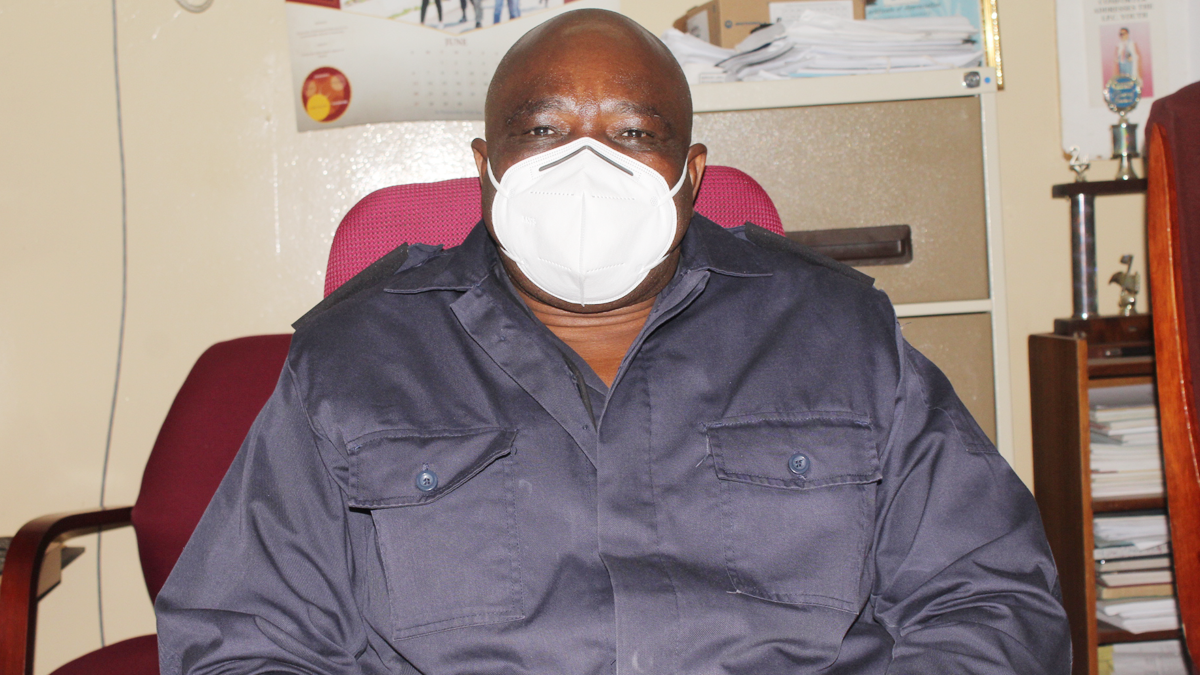 Selling fruits on the road is an offence that can attract a fine not exceeding P1000.00.

The charge is conducting oneself in a manner likely to cause danger to himself or herself.