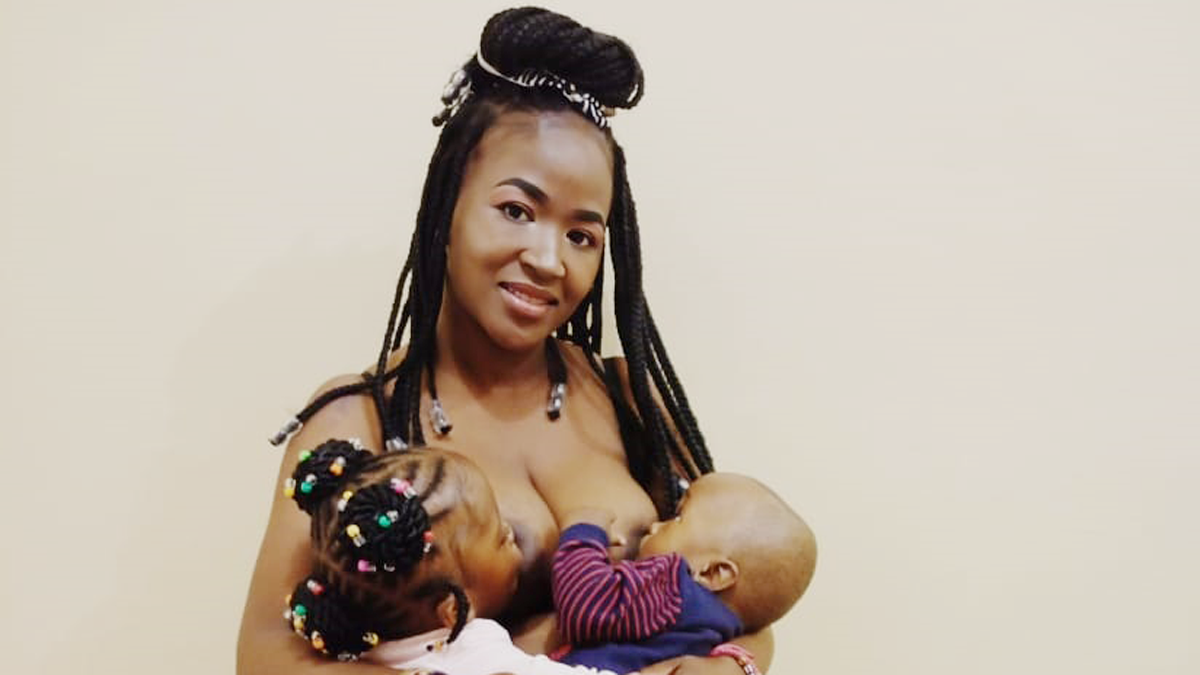 Mother-of-two highlights the joys of breastfeeding

“It creates a bond that is unlike any other,” insists Same Sadi Tsima, expertly freeing up a breast to calm her hungry three-year-old while she talks.

The married mother-of-two has come to The Voice to speak about the joys of breastfeeding.

It is an act very close to the Molepolole native’s heart.

“I gave birth through C-section so didn’t get that mother/child contact; this has brought back that special, intimate connection I initially missed out on,” gushes Tsima, 35, who lives with her husband and two children, Cartel and eight-month-old Carter, in Francistown.

Cartel, who turned three in March, has been on the breast her entire life, including throughout Tsima’s second pregnancy.

“Even when she loses weight, breast milk keeps her healthy. She is an extremely bright, energetic child with a strong immune system; she doesn’t fall ill easily!” exclaims the doting mum, who is adamant breast milk plays a big part in her daughter’s good health.

Modern science suggests she is right.

The World Health Organisation (WHO) describes breast milk as the ideal food for children.

“It is safe, clean and contains antibodies which help protect against many common childhood illnesses. Breast milk provides all the energy and nutrients that the infant needs for the first months of life,” notes WHO’s website, which recommends newborns are fed exclusively on mother’s milk for the first six months – meaning no other foods or liquids are provided, including water.

On a mission to promote breastfeeding, Tsima, who was breastfeed as a child herself, is worried that more and more young mums are shunning the breast in favour of the bottle, concerned about stretch marks and saggy tits.

“They are more focused on the short term benefits rather than what’s best for the baby in the long run. They prefer to use formula, which is much less nutritional. How can I deprive my kids of something beneficial just because of how I look!” she asks.

As well as the health benefits and the precious mother/child bonding time, Tsima notes it is financially prudent as well.

“It’s free; you save loads that you would otherwise spend on formula!” declares the full time mum, who estimates she produces around 2, 000ml of milk a day.

“The more milk your babies take, the more your breasts produce,” she explains.

For Tsima, there is also the added perk of getting to enjoy a full cleavage for the first time.

“I have noticed a big, beautiful difference,” she chuckles happily.

With the full backing of her husband, Tsima continues to breastfeed both her children, who take turns on mummy’s bosoms, sometimes even feeding at the same time.

“Tandem breastfeeding is not that common here; actually it’s slightly taboo. There’s lots of ignorance and stigma associated with it – some wrongly believe it can cause Down Syndrome and I have been scolded by others but that doesn’t put me off.”

Indeed, Tsima believes keeping both kids on the breast has brought them closer, making it easier for Cartel to adapt to the arrival of a baby brother and forge a stronger attachment.

She intends to keep her daughter on the breast until the little one decides to stop.

“If it makes her happy, healthy, why should mum stop?” she demands.

This has caused raised eyebrows when feeding in public, with many shocked to see an ‘older child’ being breastfeed.

Comments such as, “O tlaa dira ngwana mopakwano (your child will become autistic),” have been directed at Tsima, while others maintain she should cover up while feeding in public.

Undeterred, she shrugs the snide remarks off with impressive dignity.

In fact, WHO advise mothers to continue breastfeeding until the child is at least two, but stress it is fine to continue beyond this age.

To mark World Breastfeeding Week, which runs from August 1 -7, Tsima plans to hold an awareness event to encourage new mums to drop the bottle and free the breast. She also intends to give away teddy bears and toys to the less privileged.

Breastfeeding is one of the most effective ways to ensure child health and survival. However, nearly 2 out of 3 infants are not exclusively breastfed for the recommended 6 months—a rate that has not improved in 2 decades.

Breastmilk is the ideal food for infants.

It is safe, clean and contains antibodies which help protect against many common childhood illnesses.

Breastmilk provides all the energy and nutrients that the infant needs for the first months of life, and it continues to provide up to half or more of a child’s nutritional needs during the second half of the first year, and up to one third during the second year of life.

Breastfed children perform better on intelligence tests, are less likely to be overweight or obese and less prone to diabetes later in life.

Women who breastfeed also have a reduced risk of breast and ovarian cancers.

In this article:News, Same Sadi Tsima, World Health Organisation (WHO