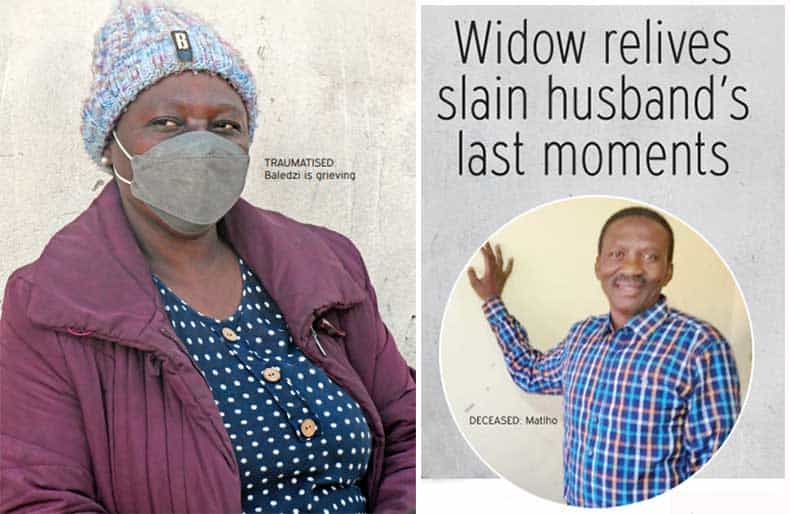 21 December 2021 is a day that will stay with Baledzi Sepapeng forever.

She will remember leaving her home in Mogoditshane that morning, setting out into the day with her husband of 21 years, Matlho Sepapeng, the future bursting with endless possibility.

It is the horrific events at the end of that day, however, that will remain clearest in her memory.

She will remember returning home that night and watching helpless as four young robbers pounced in the night, stoning her husband to death, their lust for money descending into a murderous, merciless rage.

Four months later and the police are yet to make an arrest.

Inviting The Voice into her home, despite her best efforts at a brave face, it is clear Baledzi, 47, is struggling.

“I don’t know life without my husband. You can ask anyone who knew us, they will tell you that he was my best friend. I am still in shock, in fact now his death is starting to haunt me because until now there is no trail of the suspects. Who could have killed my husband, my poor loving husband?”

It is a question she has asked herself repeatedly in the months that have passed since her soulmate’s murder. It remains unanswered.

We arrive to find Baledzi in the company of her toddler granddaughter – one of seven grandchildren to the long-time couple.

She leads us slowly to the spot where Matlho, 57, took his last, painful breath.

“They were stones all over the yard. That is what took his life because during the chaos, whilst I was screaming hysterically as they took turns slapping me, they were throwing stones and I think he retaliated. He fell down and they must have continued to hit him with the stone on his head,” she recalls, her voice barely rising above a whisper.

Baledzi says the doctors told her the killer blows were delivered from close range with frightening force. Some of his hair had been ripped out. 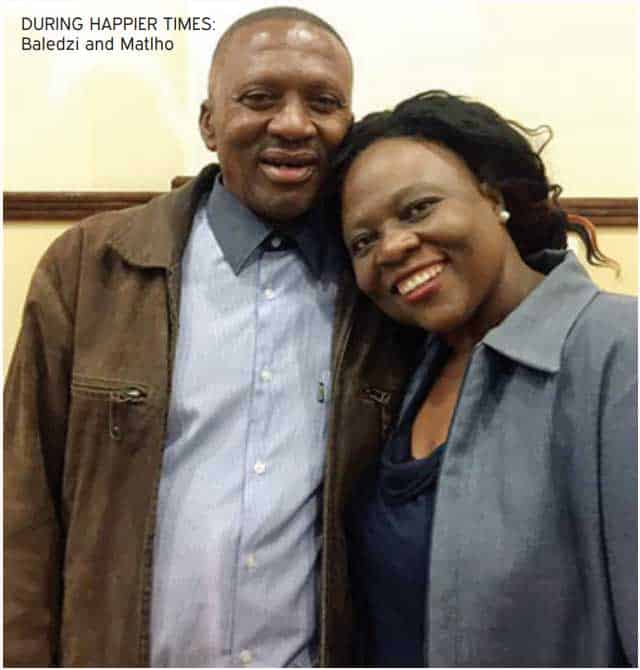 But why were the couple targeted with such fury?

“That morning we had cashed P40, 000 from my husband’s younger brother. We had sold him a portion of our farm. Our intention was to start a little business of our own.”

They had travelled to Molopolole to withdraw the cash and, after making a couple of stops, only returned home at around 9 in the evening.

She is adamant they were not followed.

“I mean the stop we made at the farm is a very lonely road. If anyone was following us from the bank they would have attacked us at the farm, not at home,” she reasons.

When they finally arrived back in town, Baledzi says they decided to deposit the money the following morning as it was getting late.

The widow remembers seeing a young man loitering around a passage near their home as they pulled in. At the time she thought nothing of it, now she is not so sure.

“They came out of nowhere, such that I froze in shock. They demanded my bag as they slapped me around. They told me they knew I had money in the bag and so I gave in and gave them the handbag. They then demanded more mone,y which they said was with my husband.”

Although she was reluctant to point fingers, Baledzi is adamant this was no random robbery.

“They took my bag and my husband’s trousers which had some of the money. That is the only thing they took. They had inside information. We did not tell anyone about that transaction, not even our children and so I am here thinking who could have known that we had the money?” she says, her voice trailing off as she ponders this poisonous puzzle.

Gazing into the distance, her dark features taking on a determined edge, Baledzi concludes with an emotional promise.

“The boys who ended my husband’s life should pay. The person who sent them, who had the information about the money, should also pay. I will not rest until my husband’s soul rests.”

Matlho was buried on New Years Eve. He leaves behind his wife, four children and seven grandchildren.

Advertisement. Scroll to continue reading.
In this article:Real lives Penene Ponono reflects on maximum prison experience When The Voice Online broke the news that popular comedian, Penene Ponono was imprisoned for 30days, the...

A father’s cry for his baby

“I can’t be denied access to a child I look after” Kgotso Mpenya (27) met the mother of his now one-year-four months old baby... Out of the darkness

The long road to overcoming mental illness She was only 12 years of age when, against her will, she lost her virginity to a...

I want what’s mine

92-year-old fights grandchildren over inheritance At 92 years of age, Mmanthobanyane Tshiamo is only eight years away from her centennial birthday celebration, but that... Widow goes blind after lengthy wait to remove cataracts Around 300 people in and around Maun are in danger of going blind as they... Life on one leg

Amputee seeks help after 19 years For the last 19 years, Tomeletso Ledaba, 42, has struggled through life on one leg. Diagnosed with bone... Having served as a photographer for over 20 years, spending a great deal of that time in the newsroom, Lefoko ‘Ras Fox’ Mogapaesi says... I’m a daughter of a murderer I was only 8-years old, my family and the social worker believed the molester over me I was...