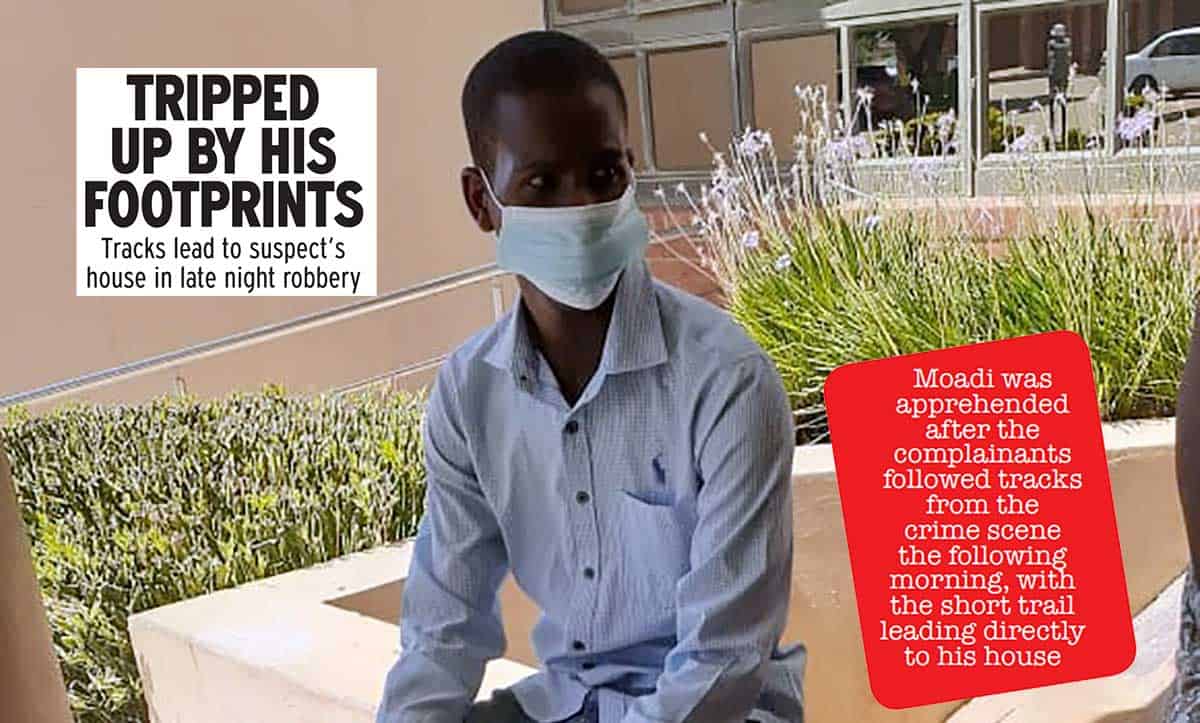 Although he maintains the stolen goods found at his house had nothing to do with him, a Molepolole man is now behind bars charged with a recent midnight robbery in the village.

26-year-old Thato Moadi is one of four men believed to be behind a violent mugging at around 0000hrs on Sunday morning.

While his suspected accomplices remain on the run, Moadi was apprehended after the complainant’s followed tracks from the crime scene the following morning, with the short trial leading directly to his house.

The quartet are said to have attacked one Tshepo Elvis Tatolo, who was driving home with two friends from a night on the town when the thugs pounced.

Moadi and his colleagues allegedly emerged from the darkness, with one of the bandits putting a knife to Tatolo’s throat while a second wrenched the passenger’s door open, demanding money and cellphones.

The thieves then marched the victims inside the house, where they ordered them to hand over more goods.

In total, the suspects are said to have made away with items amounting to P17, 000 in value, including, amongst others, an LCD Samsung 42 inch, cologne perfume and a cooler box.

It was not until sunrise the next morning that Tatolo and his mates spotted fresh shoe marks leading away from his home which eventually led to Moadi’s house and ultimately proved his undoing.

The matter was later reported to the police, who arrested Moadi the same day.

He was taken for arraignment before Molepolole Magistrates’ Court this Tuesday, where he protested his innocence.

“I want bail out. I wasn’t with the said suspects, I just found the items inside the house in the morning when I arrived from a funeral,” claimed the smartly-dressed Moadi, kitted out in a long-sleeved formal shirt.

For their part, the prosecution requested the accused’s remand, noting there were still three other suspects on the loose. It was also pointed out Moadi might interfere with investigations if set free as some of the stolen items are yet to be recovered.

To his dismay, the accused robber was told he would be spending the next six weeks behind bars, with his next mention set for 7 April – 44 days away!

In this article:Court Stories, night robbery