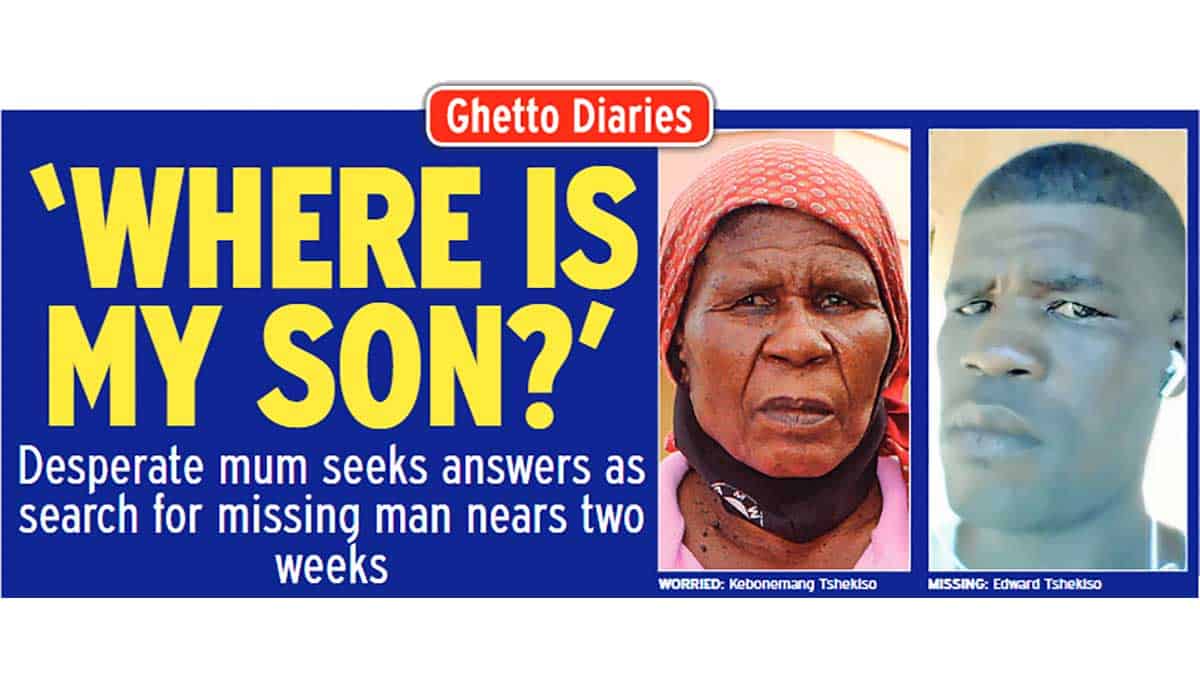 Like he did most days, on Thursday 3 February, Edward Tshekiso, 40, left his mother’s yard, setting off on the 1km journey to his home at the cattlepost, where he works as a herdboy.

The Tonota man has not been seen since.

“Please help me find my son. I wonder what could have happened to him! The police and the community have been searching for him but he is nowhere to be found; or is it because he is dead and decomposed, that is why they cannot find him?” asks the missing man’s mother, Kebonemang Tshekiso, desperate for answers this reporter does not have.

Indeed, it is an answer that as of yet, no one is able to give.

This Tuesday, 12 days since Edward’s disappearance, The Voice made the short trip to Manyanda ward in Tonota to meet with the troubled family.

We arrive to find Kebonemang, 58, sat in the yard, her neighbours and relatives huddled around her.

Her eyes are bright red, lack of sleep, stress and countless tears taking their toll.

Despite her despair, she greets us with a warm, welcoming smile, explaining the family had been wondering how to get hold of the media.

“My son left home last of last week Thursday around 1600 hours. That was the last time I heard from him. The following day I received the sad news from his nephew, saying he does not know where Edward is as he is not at the cattlepost,” says Kebonemang, pointing out some trees on the horizon to indicate just how close the cattlepost is.

Close to tears, she reveals all that was found of her son was his cellphone, discovered perched at the top of a tree at Mosi cattlepost, where he kept it for network.

It means Edward, a father of two, made it home that afternoon.

“If he went somewhere why would he leave his phone? And he has his two dogs that never leave his sight but they are there at the cattlepost,” she continues, confusion etched into her weathered features.

“When it rains, I do not sleep nor eat asking myself where he is and if he is safe and sheltered. If he is dead, why can’t the police helicopter spot him?” ponders Kebonemang, her question again going unanswered.

“His two children have been staying with their mother on the other side of Tonota but since they got this sad news they moved here with me; I can see it’s weighing heavily on them,” she adds.

Pleading with anyone with possible information on Edward’s whereabouts to come forward, the old lady described her son as medium height, fit and mentally stable. He was wearing blue dungarees the last time she saw him.

Struggling to compose herself, she quietly concludes with a message.

“Edward, if you’re reading this, please come home. We are so worried about you.”

Meanwhile, Tonota Assistant Superintendent, Ontibile Motadiele confirmed the cops have been looking for the missing man almost immediately after he disappeared but to no avail.

“We got the report from the relatives a day after he went missing and our police officers have been searching. I plead with anyone with information on his whereabouts to report to us,” said Motadiele.