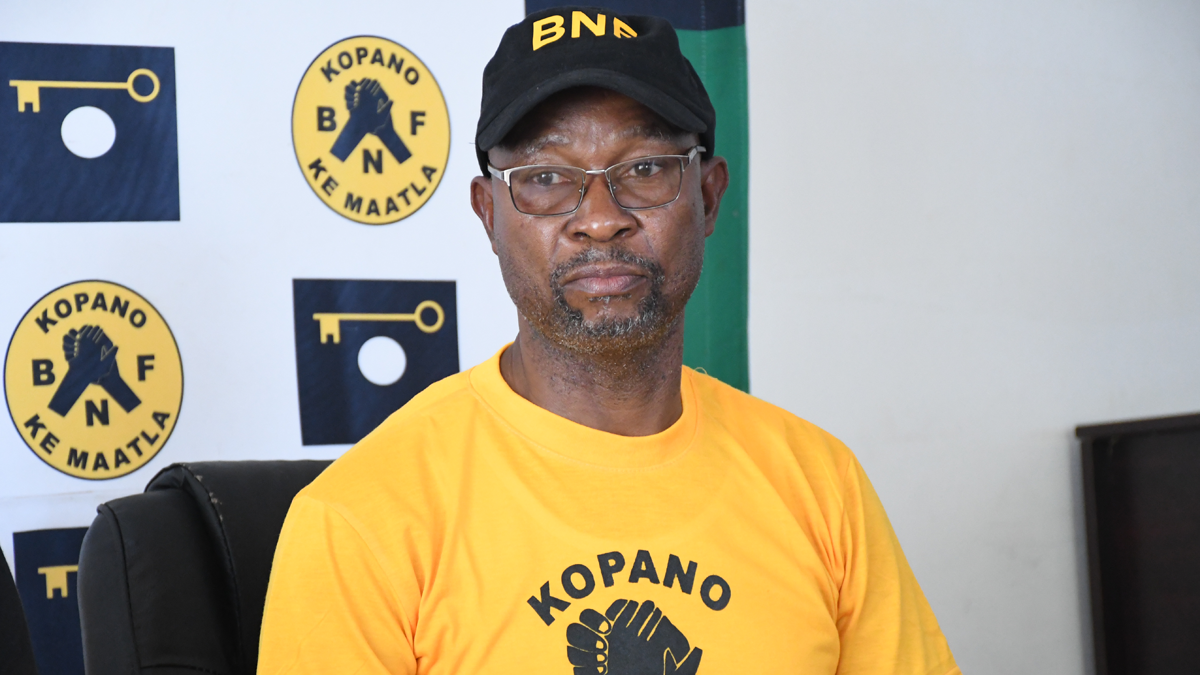 Publicity and Information Secretary for Botswana National Front, Justin Hunyepa will be defending his seat at the party’s coming congress.

This is despite a lobbylist that is currenttly circulating putting him under Secretary for Labour position.

In this week’s interview with The Voice Reporter, DANIEL CHIDA, he opens up about the Umbrella for Democratic Change (UDC) issues.

We see you have shifted from Publicity Secretary position to that of Labour Secretary why?

I have not shifted position from Publicity Information and Publicity Secretary.

It is unfortunate for whoever did this, someone is surely behind it and its not me.

I have been a media activist for many years.

As a long time and loyal member of the BNF why did you not opt for a higher position like Secretary General?

I could have stood, but the BNF has an equally competent and loyal cadre who can execute party assignments effectively and efficiently as well.

We are a team and we will complement each other.

What can you say has been the most challenging thing as party’s mouthpiece?

Lack of political party funding has been a challenge to run party activities.

The party relies heavily on membership unreliable financial contributions, unlike public service who have deduction codes.

The propaganda peddled by some so called analysts that consistently claim that BNF is dead.

True analysts come with figures and demonstrate their positions convincingly.

We have such characters who now have personal battles with the BNF.

Even when we write rebuttals to correct the lies, some Editors refuse to publish our responses and this is worrisome.

For instance, the BNF has over the years bounced back after the 1998 split, to remain the biggest opposition party as per IEC general elections statistics.

Hundreds of pictures of BNF events have been shared on several social media platforms, and everyone can see that the BNF is undoubtedly the biggest opposition party.

The conference halls were all over spilling.

In the recent 13 council ward bye elections, the BDP only won three while the opposition 10.

Out of the 10,BNF managed to get seven wards for UDC.

The BNF won for UDC 6 of those wards.

After the 2014 general elections, there were three bye elections in Good Hope, Tlokweng and Mochudi East.

The same propaganda was spread that the BNF was dead.

The BNF won all those bye elections.

But the analysts would rather say the BNF is dead refuse to applaud it.

They have to be objective and tell both the good and the bad and not be biased all the time.

Frankly, I have had general good relations with the media.

Six years now on same seat what can you say?

I took over from Moeti Mohwasa, a disciplined BNF cadre who has done a lot for BNF in different capacities.

With family resources, I registered the BNF name, logo and colours at CIPA and stopped those who were planning to steal the brands.

We also have BNF Puo Phaa electronic newsletter which was my creation; Several social media platforms have been formed through my office like BNF PUO PHAA Facebook page and WhatsApp groups.

Of recent the BCP has been issuing statements separate from UDC, as BNF what does that mean?

Time will tell what this means.

The most probable is that they are on their way out of UDC.

Note that the BCP is a registered organisation which is free to issue statements but they should respect UDC and other contracting partners.

Do you see the UDC coalition still standing in 2024?

That’s what we pray for and the BNF was formed to achieve such.

The BNF was naturally born to unite all opposition as per it’s founding principles.

It will do so with the utmost respect.

What do you suggest be done so that there can be peace within the umbrella?

Some leaders are extremely ambitious for power and this is where the problem comes from.

See how the BNF has sacrificed its winnable constituencies and wards since 2014 and recently its ward in Ga-Molopo.

Who do you blame in all this?

I don’t want to play the blame game as we want a united opposition.

But you can judg for yourself.

Why does the UDC not have its own independent office away from that of the BNF?

There are resource constraints for all opposition parties.

This is why we call for political funding

Will we see you contesting for parliamentary seat again?

If the membership says so and the opportunity arises, I would contest.

I have been in national, regional and international assignments, boards and committes and accumulated a lot of experience to be a legislator.

All parties must engage in good faith and be open to each other.

Batswana want a united opposition and they should make judgments for themselves and punish the wayward characters.