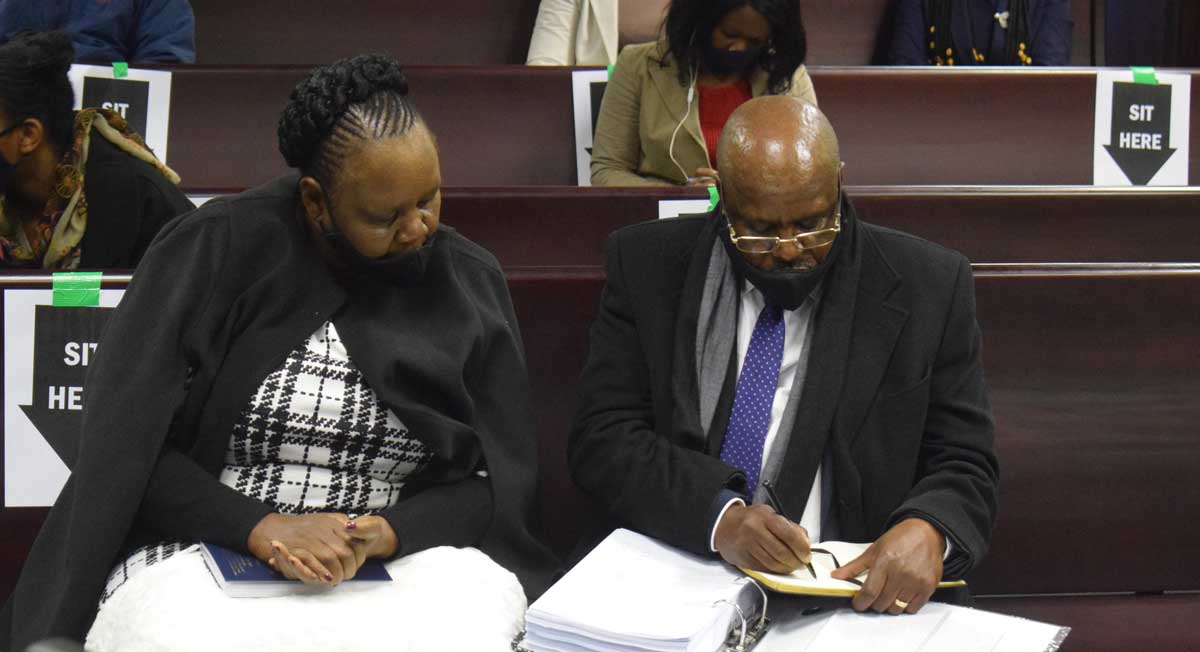 UNCERTAIN: Morupisi (r) and his wife

The court case which has been dragging before court since 2020 ended in May this year.

The couple were charged with, among others, money laundering and abuse of office.

At the heart of the case is a custom made Lancruiser which the state accuses Morupisi and his wife of having acquired for facilitating an illegal deal that siphoned over P500 million from Botswana Public Officers Pension Fund (BPOPF) through Capital Management Botswana (CMB) and a South African company called Mono Squad Company.

According to court documents on the charge of money laundering, the particulars of the offence are that Morupisi and his wife Pinny Morupisi on or about May 15, 2017, laundered the amount of P630, 988.99, which the state argue are proceeds of crime.

On the charge of abuse of office, Morupisi is said to have- while employed as the Permanent Secretary, authorized Capital Management Botswana (CMB) to administer the BPOPF funds as private equity managers, and obtained valuable consideration for himself and his wife’s company, R7 Group.

When it comes to charges of bribery, Morupisi is said to have, acting together with his wife, received valuable consideration to wit a Toyota Land Cruiser for himself and his wife’s company.

Fighting in Morupisi’s corner, senior defence lawyer Busang Manewe showed the court the trail of money which was used to pay for the car.

Giving details of the Land Cruiser acquisition, Manewe said the vehicle never belonged to his client, but was purchased for his wife’s business and he simply became a signatory to the purchase agreement at the time.

He explained that his client made a deal with a South African company, Manor Squad, that he would pay R40,000 for the car every six months and that it was never paid with public funds as stated, but an established payment plan. “The company did not have any funds, so he agreed to sign on its behalf since the director was his wife”.

Manewe said it was not true what the state wants to insinuate because Morupisi paid for the car using his savings and the sources of funds were either from deposits from his First National Bank account directly or from his Absa account, all of which came from either his salary, his BPOPF pension since he had retired from public service. “There is clear documentation about my client’s money trail and there is nowhere that shows he used public funds. He had sources of income, savings and life insurance policies that paid off, and he was able to pay for the car,” he said.

On account of Morupisi authorising Capital Management Botswana (CMB) to manage BPOPF’s assets by signing its contract on behalf of BPOPF when he knew it was illegal, Manewe said Morupisi was asked to sign the documents by his secretary and that by that time the acting director-general had already signed and inserted a date indicating that it was BPOPF management, who recommended the appointment of the CMB not him. “My client was in fact not present on the day the BPOPF board approved management’s recommendation to appoint CMB and that’s the reason why he signed the contract even though there was a court order suspending the council’s activities,”he argued.

During trial Morupisi chose to give unsworn evidence.