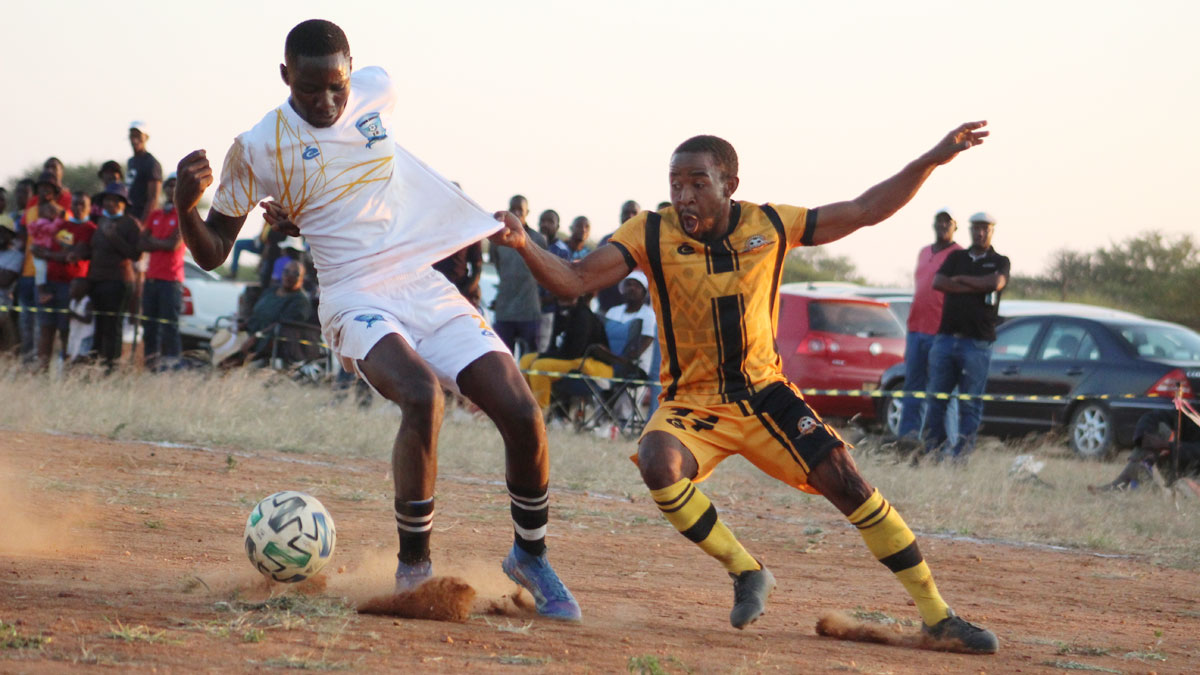 CLINGING ON: Chadibe held for the win

In a breathless, brilliant game of football, Eleven Angels’ push for the play-offs suffered a painful, potentially disastrous setback on Saturday, the high-flyers falling to a 1-0 defeat in Chadibe.

Incredibly, in a tense, high-quality match bursting with drama and moments of magic, the Premier League hopefuls hit the crossbar four times in the first half.

When they did get their shots on target, Angels found an inspired John Mogale in the way, Chadibe’s third-choice keeper putting in the performance of his life to repeatedly deny the away side and all but guarantee his team First Division football next season. 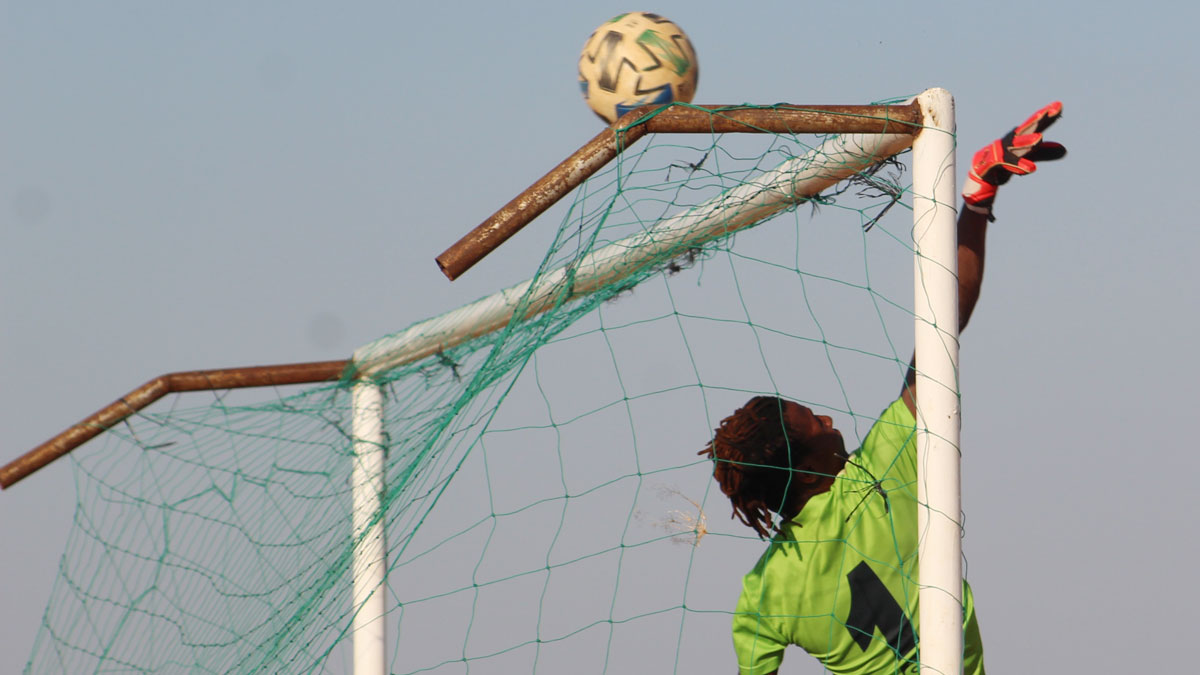 FINGERTIPS: Mogale to the rescue…again!

Following a lively start to the fixture, Angels should have taken the lead in the 5th minute, their defender, Mompati Mbidzo slamming his header into the bar after Mogale misjudged a flighted corner.

From a metre out, Mbidzo will be wondering how he missed!

It proved a taste of things to come for Coach, Seemo Mpatane and his players. 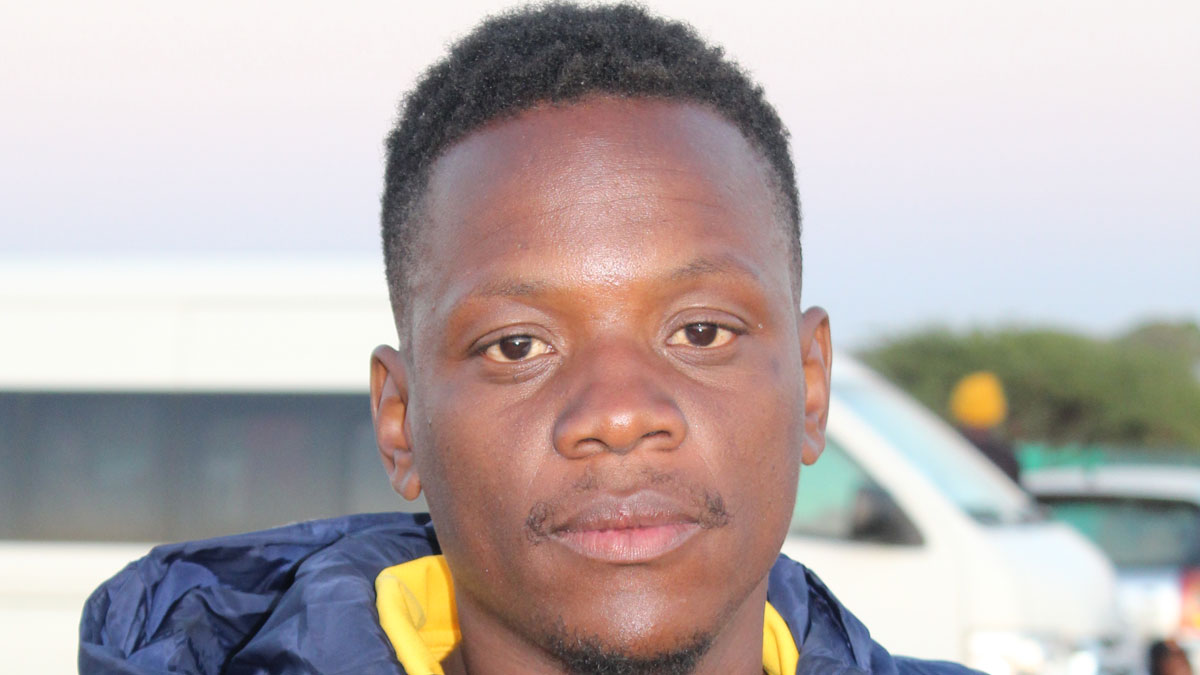 The game’s defining moment played out minutes later, when, in a rare first-half foray into opposition territory, Chadibe striker, Allen Diwere somehow got enough elevation on his scooped shot to lob Keletso Lekuni on his line.

From then on it was the Mogale show.

The dreadlocked goalie pulled off several incredible saves, showing cat-like reflexes as he flung his body through the air, acrobatically tipping close-range headers over the bar and pushing fierce, point blank efforts away.

In between, Angels struck the woodwork a further three times, including what would have been a contender for goal of the season from Monty Enosa.

Displaying dribbling skills the late Diego Maradona would have been proud of, the striker weaved his way into the box, playing tap-tap with the Chadibe defence and leaving four players in the dust.

Moving at speed, Enosa muscled his way into a shooting position, his half-volley crashing into the underside of the bar with a motionless Mogale beaten.

The lanky forward looks a star in the making and, should Angels fail to go up, there will likely be plenty of premier league teams who come sniffing for his services.

In a week when two of their former players, Doctor David and Gofaone Mabaya, were called up to the national team, the club could very well have another future Zebra on their hands.

Unable to maintain the same ferocious tempo, Angels faded slightly in the second 45, largely restricted to long-range efforts and half-chances as they pushed in vain for a point.

Indeed, as the game wore on, Chadibe looked increasingly dangerous on the counter, with substitute, Gosaitse Manuel lively up front and forcing Lekuni into two smart saves.

At the final whistle, Chadibe’s fans and players celebrated as if they’d won the league, Coach, Murphy Maseko punching the air in delight as the Chad Arena went wild.

In contrast, overcome by emotion, Angels devastated players sunk to their knees in despair, some unable to hold back tears.

The result, combined with Santa Green’s 3-1 success over Motlakase Power Dynamos – the in-form Mahalapye side’s fourth straight victory – means the gap between second and third is now down to a single point.

With three games left to play, Angels are still in control of their destiny. However, with Santa Green hot on their heels, they cannot afford anymore slip ups. 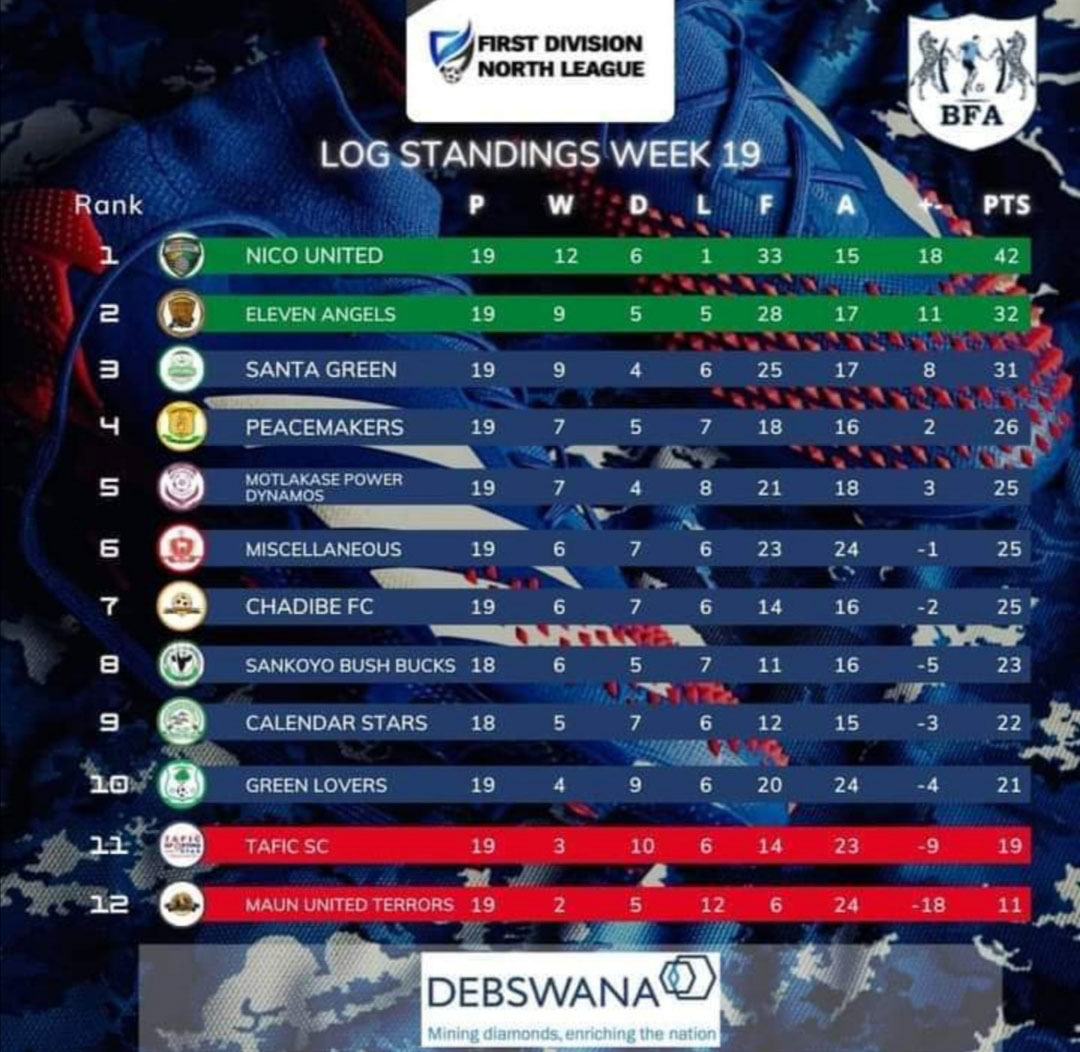 Mpatane will have to lift his young squad for the final push, starting with a home game against Miscellaneous this week, as they look to secure a play-off spot and a shot at the top flight.

For Abafana Ba Jubulile, the win moves them up to 7th and, with a six-point buffer between them and Tafic, should assure their safety for another season – quite an achievement for the Debswana Division One North newcomers!

“We were very unlucky but we can’t be too disappointed. I lost count of the number of times we hit the post and their keeper was on top form. We struggled to play our free-flowing passing football in the second half as the grass was quite thick at the end we were attacking.I’ve told the boys things are still in our own hands – the equation is simple: we win our three games we qualify for the play-offs. This is a new experience for all of us but I’m confident we can do it. We’re creating chances and the goals will come!” 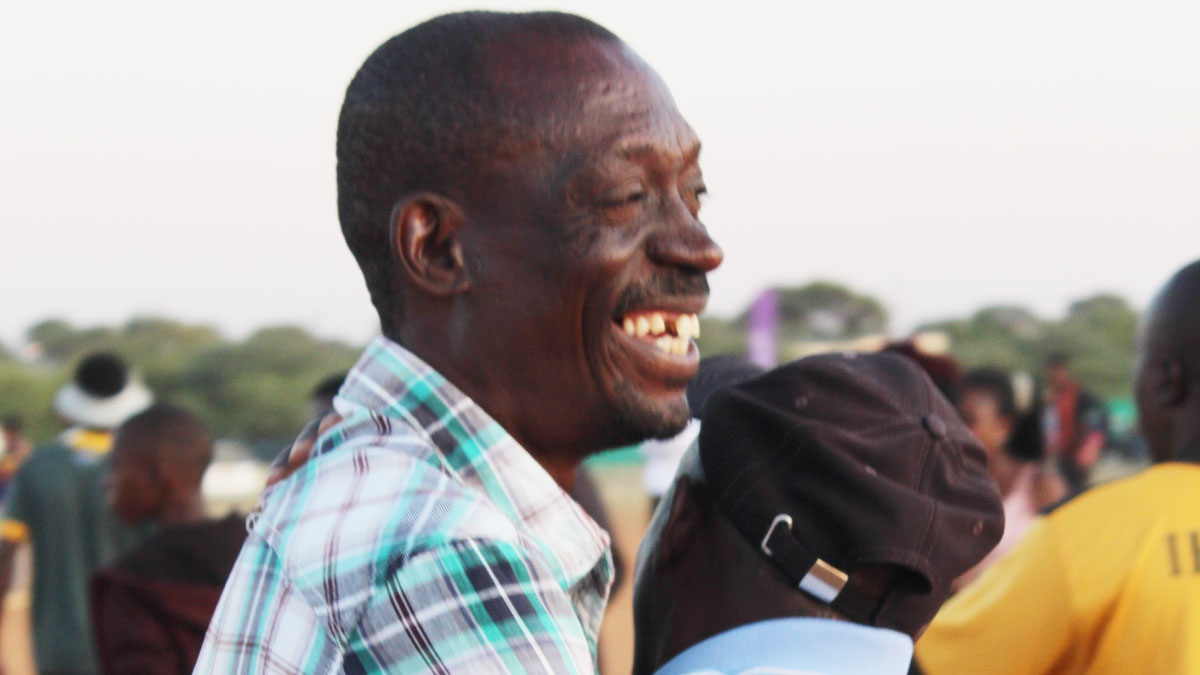 “I’m delighted with the performance. We were under pressure in the first half and allowed their wing banks and midfielders too much time and influence on the ball. We got this right in the second half, cutting out their combination play and forcing them to hit long balls, which was much easier for our defence to cope with. Credit to Mogale, the young lad was excellent. We rode our luck at times, but wow what a result!”