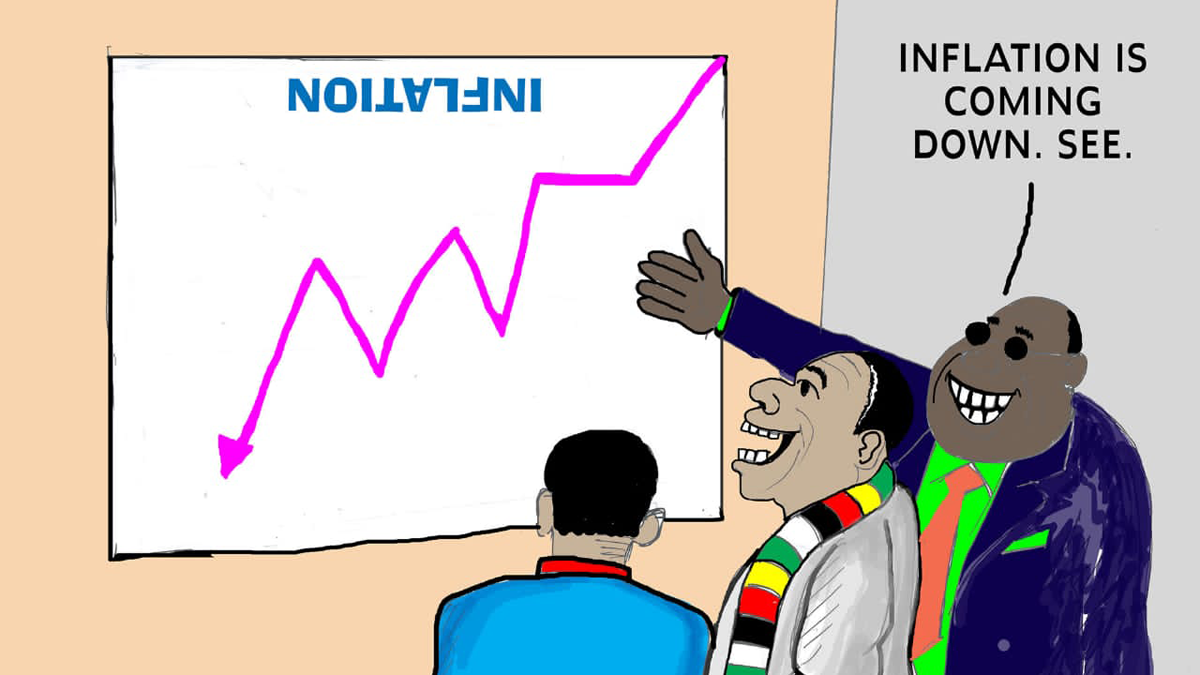 FANTASY: A cartoon on the Zim inflation situation

On Monday, Central Bank Governor, John Mangudya announced a host of measures to curb the country’s economic crisis. These included the increase of interest rates from an already high 80 to a staggering 200 percent, making it the highest in the world. This instantly made news the world over, I guess because of the fact that no any other country has such ridiculous rates, even those at war.

And knowing how things work in Zimbabwe, instead of these measures yielding positive results, things will actually turn for the worst.

A few weeks back, the same central bank suspended the borrowing facility, meaning that banks and individuals could no longer borrow money from financial institutions.

Within a few days, prices shot up and that decision was reversed. Sadly prices of commodities never came down.

On closer inspection, one could realistically say that same policy has come back but in a different form as surely no can afford to borrow money with such high interest rates!

Time will tell if things will change for the better and if inflation, which is currently at 191 percent will stabilize and even come down.

And by the way, fuel now costs an average of US$1.95 (about P23.40) a litre and most of us are really feeling the pinch – makes you appreciate living in Botswana dear reader, even though your fuel prices are rising, they have a way to go to reach ours!

We stay 40kms from Bulawayo and normally drive to town as it is convenient but this week we had to forgo convenience and use public transport which is a lot cheaper. With the way things are going, our vehicle will be parked for a long time as the going gets tougher.

Someone wrote on Twitter recently that at the rate at which things keep changing for the worse in our country, most of us will survive on anti-depressants; I couldn’t agree with them more.

Of course some people can argue that the whole world is struggling for one reason or the other but for us, it has been struggle after struggle with very little to smile about.

In other economic related news, the government says it will soon introduce gold coins as store of value. So instead of putting those hard earned US dollars under the pillow as people no longer have confidence in the banking system, the government is saying people should instead bring the cash to the bank and be given the gold coins which somehow appreciate in value.

Of course that only applies to the rich and not the majority of us who live from hand to mouth. It is hope this will increase circulation of the much needed American dollars.