A HELPING HAND: Donations from 020 Holdings

The two Francistown-based companies donated goods worth a combined P10, 000 to the youthful side.

In an interview with Voice Sport, the team’s founder and coach, Seemo Mpatane admitted that following the suspension of the season, his club has struggled to maintain players.

“Without football action it is tough for a small team such as Eleven Angels,” reiterated Mpatane.

Mpatane, whose remarkable rise as a coach is the stuff of legends in the second city, revealed he sent out an SOS to a number of companies to assist his players.

“Both 020 Holdings and Tlhase Film Works responded” he added happily.

For his part, 020 Holdings Director, Obonetse Ofentse explained they have a long-standing relationship with Eleven Angels.

“We’ve supplied them with replica t-shirts and other logistics throughout the season. We were actually planning to buy food hampers for players and on realising that another company had done that already, we decided to buy toiletry.”

Ofentse said his company, which deals with fuel maintenance and logistics, has always lent a helping hand whenever they can.

“These are young people and it’s our corporate social responsibility to ensure they remain on the straight and narrow during these trying times,” he added.

When the season ground to a halt in March, Eleven Angels FC were third in the table with 29 points, behind Nico United and Sua Flamingos who are level on 34 points.

With just four matches remaining to crown the Champion, Mpatane is optimistic his charges can close the five-point gap and at least make the play-offs.

“Both Sua and Nico were flying high before the league suspension. They were winning their matches with ease. However, this break will have definitely affected their momentum, and it might work to our advantage,” Mpatane said.

The youthful coach told Voice Sport that although he hopes his team will push for a top two finish in the last four matches, he’s also concerned that his players may struggle when the league resumes.

“I’ve asked my players to train individually and send me videos of their training sessions everyday. I also send them daily drills to follow,” said the tech savvy tactician. 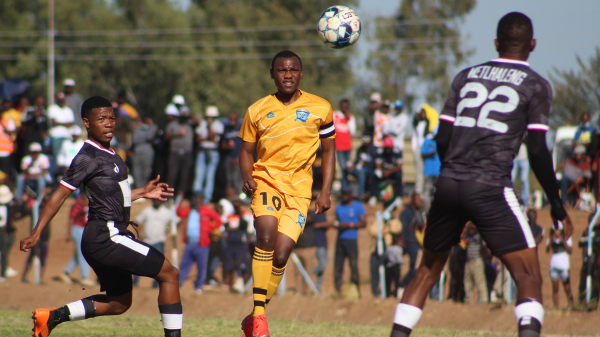 Chaos on and off the pitch as Angels win promotion On a day in which Devils reared their ugly heads in the crowd, Angels...