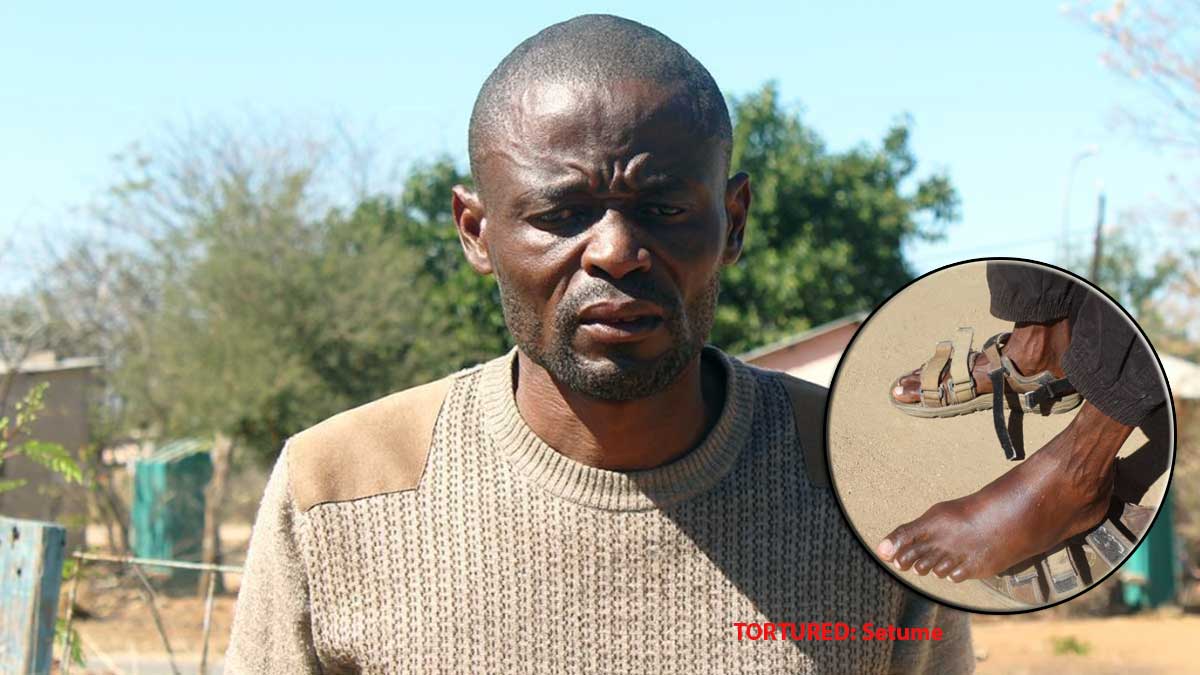 An evening ride into the city two weeks ago ended brutally for Gerald Estate resident, Goitsemodimo Setume, and his two companions.

The 41-year-old is nursing badly bruised feet following what he called ‘a brutal assault’ by the police.

Relating his ordeal, Setume says he’d hitched a ride into the city centre from a friend.

His woes started when the vehicle turned towards a petrol station to fill-up.

“We never made it as a police car cut us off. We were all arrested and taken to Kutlwano Police Station,” narrated Setume, who stood for the 2019 general elections as an independent parliamentary candidate in Francistown West.

At the station, Central Investigation Department (CID) officers accused the trio of being part of a syndicate dealing in fake driver’s licences.

Setume admits that night he learnt the car owner was in fact a wanted man in connection with fake driver’s licences.

“This guy is based in Gaborone and was only here for the weekend; I had no idea he was a wanted man! My plea to be released fell on deaf ears as police were convinced we were working together,” Setume tells The Voice.

The wannabe politician, who garnered 40 votes at the polls in 2019, says his nightmare began two days later, when they were transferred to Central Police station on Monday morning.

“Once again, we were questioned about the licences and I declared my innocence, which seemed to infuriate the police!”

Setume says they were taken to ‘a torture chamber’ where three officers took turns in assaulting them in order to extract a confession.

“I was made to lie down. An officer placed a chair above me and sat on it, another held my feet tightly, while a third officer repeatedly struck me underneath my feet with a baton stick,” he recalls, shuddering at the fresh memory.

“They kept asking me to confess if I wanted the punishment to stop, but I could not confess to a crime I was never a part of,” insists Setume.

However, after what seemed like an eternity, desperate to relieve the battered soles of his feet and end the unforgiving strike of the baton, he confessed.

“I wanted them to stop. I’m not a criminal, my only misdemeanor was a drunken driving case about four years ago, a matter which was dealt with.”

His eyes misting over, Setume, who is barely able to walk when he meets with The Voice two days later, says even after his confession, the police never charged him with any crime.

Instead, they simply confiscated his driver’s licence and let him go, but not before ordering him to jog around the chamber, a move meant to reduce the swelling.

“As I hobbled out the torture chamber, one officer ordered me not to limp as it might attract attention, uttering these words, ‘Tsamaya sentle monna, o batla go mpolaisa Barena?’ (walk properly, or you’ll cause trouble for me with my superiors),” states the tearful Setume.

“My driver’s licence is valid. I’ve no criminal record, but still I was beaten up by officers of the law who threatened to lock me up when I confronted them upon my release.”

Temporarily confined to the house as he waits for his feet to heal, Setume says he needs help taking the police to task.

“One of the officers who sympathised with me advised me to get a lawyer and register this matter,” he reveals.

However, taking the legal route against the cops in such matters is tricky.

Setume may find himself up against a system that aids police brutality, and having to report the issue back to the police who often sweep cases under the carpet and intimidate victims.

This is according to former Deputy Police Commissioner and former Chairman of the Parliamentary Foreign Affairs, Defence, Justice and Security Committee, Kenny Kapinga.

Following several allegations of ‘heavy handedness’ by the Botswana Police during the State of Emergency (SoE), Kapinga has been advocating for an independent authority to investigate reports against the boys in blue.

Kapinga is adamant there’s no way the police can investigate themselves and arrive at a fair conclusion.

“There has been no movement from government since our recommendation. The government is not interested, because she does not believe in the protection of fundamental human rights,” opines the former top cop and current Okavango Member of Parliament.

The MP says the Botswana government’s refusal to set-up a human rights commission like other countries, instead giving the authority to the Ombudsman, is indicative of her attitude towards the protection of human rights.

“There’s no hope because BDP resolved to dissolve all the parliamentary oversight committees. Now there’s very little we can do. Such cases, unfortunately, will continue,” he predicts.

Meanwhile, while he was aware of Setume’s arrest, Central Police Station Commander, Lebalang Maniki, told The Voice he’s not been made aware of any reports of police brutality. The superintendent advised the complainant to lodge a formal report with the police.

Advertisement. Scroll to continue reading.
In this article:Headlines, Inside the police torture chamber