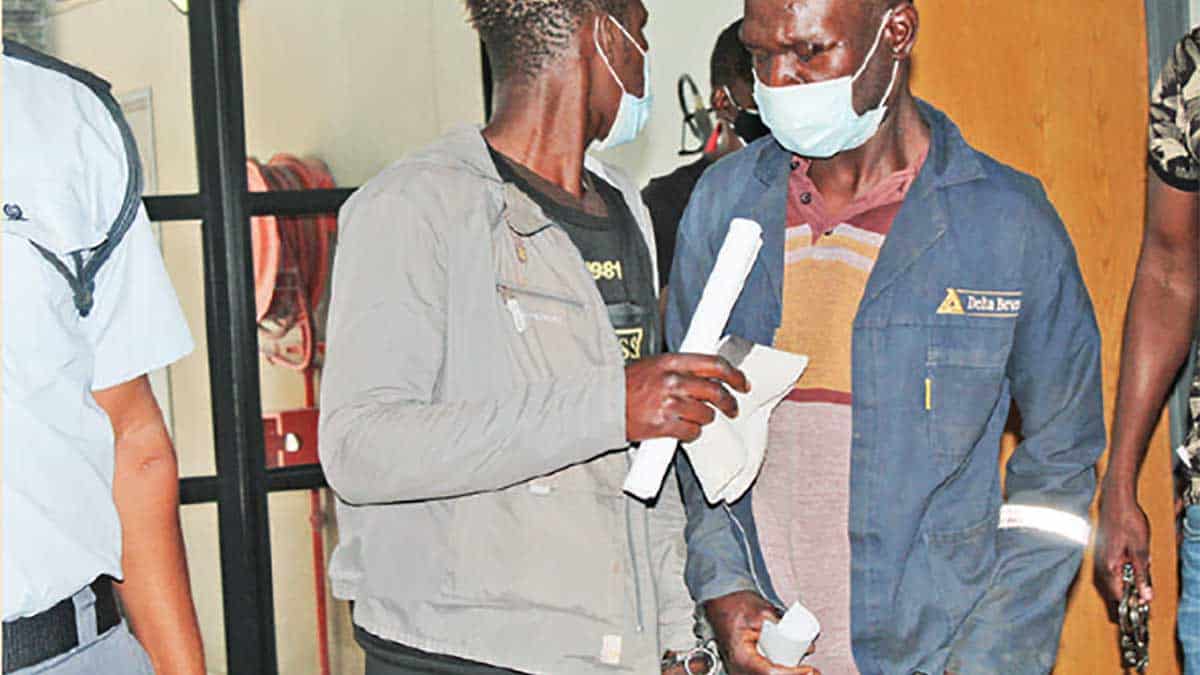 TICKING TOGETHER: Sibanda (with dreads) and Moyo

In an identical outcome to a similar case from last month, two suspected ‘Zama Zamas’ from Zimbabwe have been cleared of illegal mining.

However, suffering the same punishment handed down to five of their countrymen in January, Codenia Sibanda, 24 and Khubekani Moyo, 40, were jailed for a year for being in Botswana illegally.

While the duo could not escape the slammer, their co-accused, 28-year-old Motswana, Kabelo Mosweu walked away scot-free.

The trio had been accused of digging for gold at the abandoned pits of Shashe Mine near Francistown back in October.

Court heard that police officers patrolling the area caught Sibanda at the mine, who quickly implicated Moyo and Mosweu. The cops then tracked down the pair to their rented houses in Francistown and all three were arrested.

In a stroke of good luck for the suspects, and an embarrassing mishap for the authorities, the case was dropped due to lack of evidence this Tuesday when it was revealed the machines at the Geology department are not functioning.

The Zimbabweans fortunes did not last long though, the charge of entering the county through an ungazetted point coming back to haunt them.

Pleading guilty, the would-be gold hunters begged for leniency, telling court they had come to Botswana looking for work.

“I am the one providing for my daughter in Zimbabwe. Giving me a long sentence will affect her as no one can take care of her,” stated Moyo nervously.

His words failed to move the Magistrate, however – depending on your view of what constitutes ‘a long sentence’!

Noting that cases involving illegal immigrants were becoming common occurrences in court, the Magistrate said, “It cannot be allowed to continue; the court has to pass a sentence that will send a message to others. I therefore sentence the accused persons to a year in custody, backdated to the time they spent in prison.”

Having been behind bars since their arrest, it means Moyo and Sibanda will next breathe free air in October.

Leaving court shackled together, the pair cast rueful looks at Mosweu, who strolled away to freedom, sparing his mates an apologetic smile.