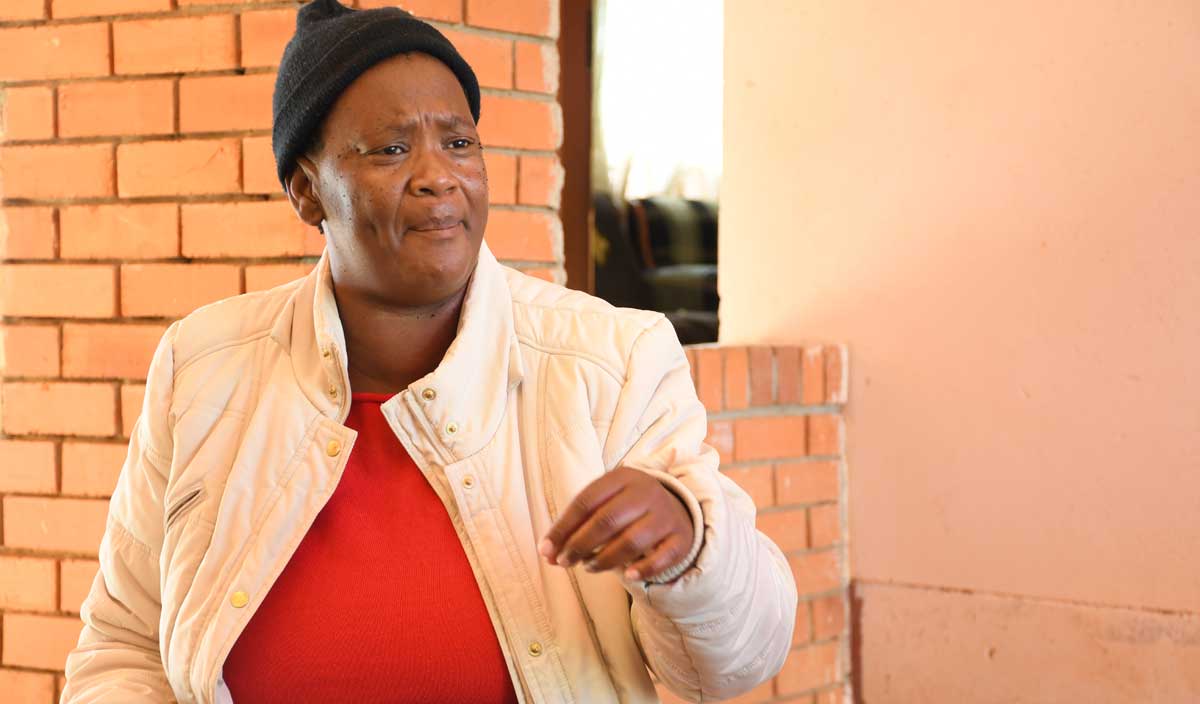 In a murder incident that has sent shock waves across Woodhall location in Lobatse, a young man mercilessly killed his grandmother with an iron rod last Saturday.

Bakang Mothibi (31) busted his 78-year- old grandmother, Kedidimetse Mothibi’s head at her home and splattered her brains all over the place.

The old woman had angered Mothibi by refusing to give him money he had asked for.

The brutal murder allegedly happened whilst three Woodhall police officers (names known to this publications) were idling outside the house after the grandmother had called emergency line for help.

The Voice visited the grieving family who we found fuming. According to them, had the police who were in the yard when their mother was senselessly killed acted, she would still be alive.

Speaking on behalf of the family, the eldest son, Armstrong Mothibi (57) did not mince his words when he condemned the police for negligence.

Armstrong revealed that the old woman had, with the help of a neighbor who is also a relative called the Police asking for protection.

“My mother phoned the police. She told them that she had locked herself inside her bedroom because her grandson was attacking her and that she feared he was going to kill her. Three police officers came, two females and one male and she came out in her night gown to report the matter,” said Armstrong.

According to the devastated son the police then instructed her to go back into the house to wear clothes so she could accompany them to the police station to record a statement.

However that would be the last time the grandmother would be seen alive. As soon as she went back inside at the instruction of the Police, she met her fate.

The grandson who was hiding inside the house locked the front door and struck the old woman on the head with the rod.

“She screamed twice and that was it. Her brains splattered all over the place while police just stood there until a neighbor alerted them that the killer, my nephew had jumped out through the window and escaped. The neighbors at this time saw him holding the bloody rod and screamed for the police who were idling at the front door. Why didn’t one of the female officers accompany my mother to her room to change? Asked the son

The family has told The Voice that whilst their main focus was to bury their mother they will be reporting the three officers for negligence.
“My mothers head, is in the hands of those three officers and they must pay. We want justice! I am a public officer and when public officers are tasked with protecting us and they just idle around and get someone killed, it is just not right.”

For her part, Mmapula (49) who confirmed that her mother’s killer is her first-born son said she was left feeling numb.

“‘I am caught in between; on one hand my son is in court for murder. On the other hand I have lost my mother. I also don’t know what to say to my siblings because my son killed their mother mercilessly,” said Mmapula who attended her son’s arraignment alone because she was too afraid to ask her mourning siblings to accompany her.

“I will actually not be asking for my son’s bail at the moment. I want him to spend some time in prison, maybe he will come back a reformed person. I want the law to take its course. My son has brought me shame in this family and in the township, I hear people whispering behind my back that, “Ke ene yole yo ngwana wa gagwe a bolaileng mmagwe (loosely translated It is that one whose son killed her mother, his grandmother)” she said.

Bakang appeared before the Lobatse magistrate court on Tuesday charged with the murder of his grandmother. After a brief court session the Magistrate ruled that he be sent to a mental hospital for psychiatric evaluation.