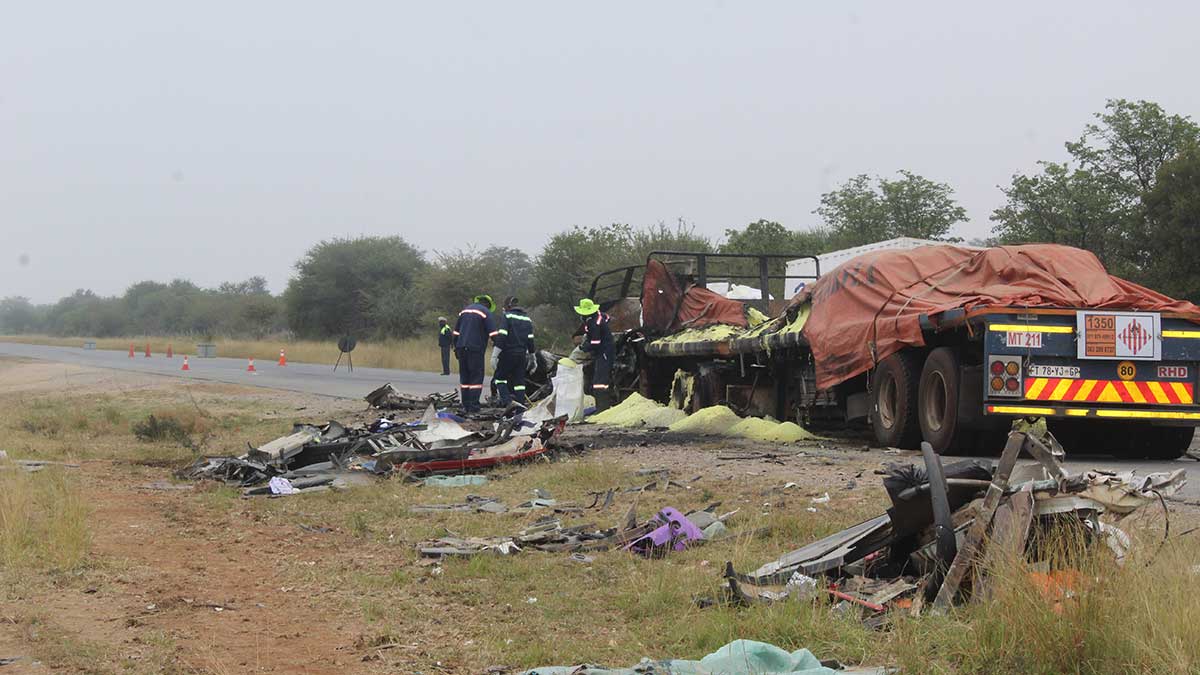 Chemical experts are racing against time to contain a sulfur spill along the A1 road in Makomoto village following a fatal crash in the early hours of Monday morning.

The fatalities included the truck driver and a passenger on the Royal Luxury bus.

It appears the accident occurred when the bus attempted to overtake, only to crash into the oncoming truck.

Several passengers were treated for minor injuries and shock at Tonota clinic, while the more seriously wounded were referred to Nyangabgwe Hospital.

The bus driver has since been arrested and charged with causing death by reckless driving.

Confirming this, Tonota Police Head of Traffic, Keogotsitse Rasina, told The Voice, “He appeared in court this (Wednesday) morning and has been remanded.” The Assistant Superintendent further revealed that while the injured are recuperating, and the courts dealing with the matter, an environmental scare was unfolding at the accident scene – some 10km south of Tonota.

“There are chemical experts on the scene fighting to contain the sulfur,” disclosed the police chief.

Rasina explained the specialists use the cold morning and evening temperatures to collect the spilt sulfur.

“It gets tricky when it’s hot because it foams and releases a pungent smell,” he added.

At room temperature and pressure, sulfur is a yellow solid.

Today, it’s most common use is in the manufacture of sulfuric acid, which in turn goes into fertilisers, batteries and cleaners. It’s also used to refine oil and in processing ores.

While relatively non-toxic to humans, under certain circumstances, it can release toxic hydrogen sulphide and sulphur dioxide gas.

Sulphur dioxide causes a range of harmful effects on the lungs, including: wheezing, shortness of breath and chest tightness as well as other problems, especially during exercise or physical activity.

Hydrogen sulfide (H₂S) is a colourless gas and smells like rotten eggs. Exposure to H₂S may cause irritation to the eyes and respiratory system.

Advertisement. Scroll to continue reading.
In this article:Sulfur scare at A1 accident site