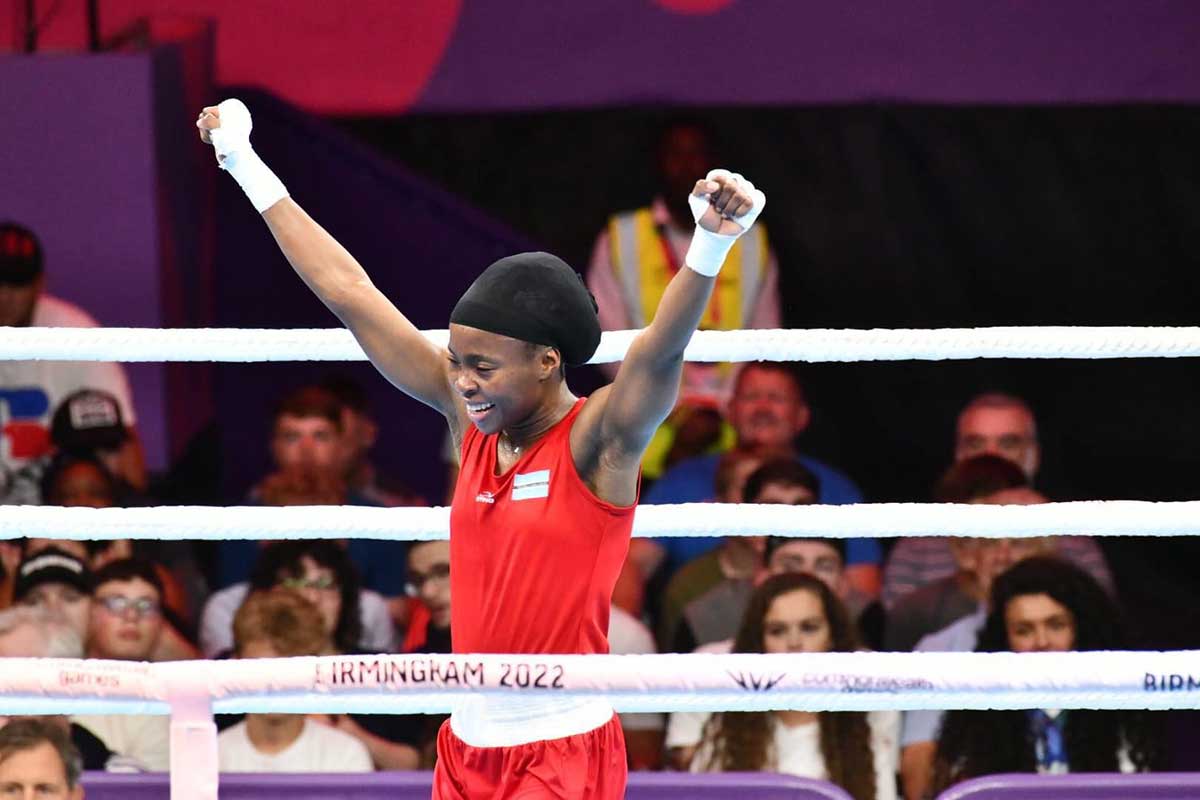 VICTORY: After being awarded the win

Although ‘The Bronze Bomber’ is a nickname traditionally associated with American heavyweight, Deontay Wilder, closer to home, it is a title that we can now give to our very own boxing badass, Lethabo Modukanele.

This after the 26-year-old punched her way to a brilliant bronze at the just ended Commonwealth Games in Birmingham, England, to land one of only two medals won by Team BW at the sporting spectacle – the other being a silver for the men’s ever reliable 4x400m relay team.

The Mahalapye native is the first female boxer from Botswana to win a Commonwealth medal and ends a drought in the ring dating back to 2010, when Oteng Oteng and Tirafalo Seoko left Delhi with a bronze and silver respectively.

Competing in the 45-48kg category – the minimum weight division – Modukanele made her bow in the quarter-finals, proving slightly too strong for Sri Lanka’s Nadeeka Pushpamukari.

Coming out for the third and final round with the judges having the bout tied at one round each, Modukanele put in a nerveless performance, her fast feet, quick hands and solid defence steering her to victory.

In the end, she won by split decision, with four of the five judges awarding her the fight while the fifth had the brawl down as a draw.

With a bronze already in the pocket, Modukanele went up against England’s Demie-Jade Resztan in the semi-finals. Roared on by the boisterous home supporters, the Englishwoman was a class above, easing to a relatively straightforward triumph on points, the judges unanimous in recording a 5-0 verdict.

Speaking to Voice Sport, her cherished medal gleaming around her neck, Modukanele stressed she had entered the competition with a podium finish firmly in her mind.

“This is my second time competing in the Commonwealth Games and this time my goal was to fight for a medal position, which indeed I managed to accomplish,” reflected the tiny, history-making pugilist.

Having been in camp since the start of the year, Modukanele was quick to thank her teammates and coaches for all their support.

‘The Bronze Bomber’s’ Birmingham success has made her hungry for more.

“I am very happy and over the moon having to be the first female boxer in my country to win a medal at the Commonwealth Games and this encourages me to do more,” concluded the reigning Zone 4 champion confidently.

Advertisement. Scroll to continue reading.
In this article:The bronze bomber