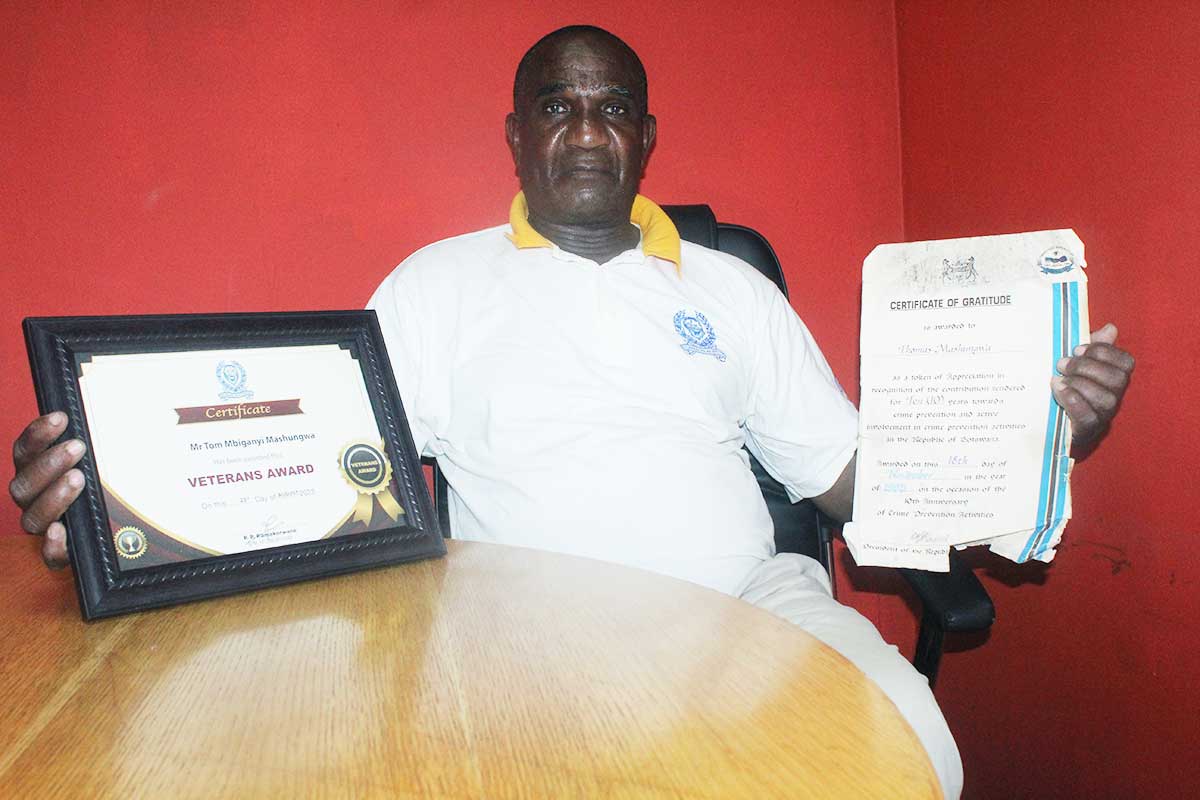 While most men his age are happy to put their feet up and unwind at home, 67-year-old Tom Mbiganyi Mashungwa has little time for relaxing.

As he has been for much of the last 38 years, the Mathangwane headman remains at the forefront of fighting crime in his village.

The Mashungwa ward chief is chairman of the village’s Crime Prevention Cluster, a group of volunteers dedicated to keeping the streets of Mathangwane as safe as possible.

For his tireless service and contribution to the cause, Mashungwa received a veteran award from the Botswana Police Service at a special ceremony in Francistown recently.

It is a just reward for a life well-lived.

However, talking to The Voice this week, the committed old man says he still has much he wants to achieve.

“It is the skin that wrinkles, not the mind. Even when my feet get so tired I can no longer walk, I’ll continue helping my colleagues in one way or the other,” he chuckles, looking fit as a fiddle as he happily shows off his awards.

Speaking in deepest, purest Kalanga, Mashungwa said he was proud to be making a difference in society.

“Crime is very worrisome in the community. Most of the perpetrators are unemployed youth followed by those from the neighbouring countries forced into a life of crime by poverty. In Mathangwane, we have a problem of house and shop breaking and theft. So, we came up with ways of preventing these crimes,” he reveals.

“We have each other’s numbers so that when something happens, we call each other. If someone goes out, they notify their neighbours, so they look after their house,” explains Mashungwa.

Having joined the cluster community as a Treasurer in 1984, when working at Botswana Meat Commission (BMC) in Lobatse, the elder knows exactly what he’s talking about.

“For me to join, I was moved by their words that they are few in numbers as compared to the community. Botswana Police alone cannot be able to fight crime. And it is us, people, who know the criminals in our circles, so working with them makes the job easier,” notes Mashungwa, who has previously served as District Chairman for Woodhall, Ramatlabama, Goodhope and Lobatse police clusters.

Mashungwa, who returned to his home village of Mathangwane in 2009, tells The Voice he managed to balance his clusteral duties with his day job by performing them after working hours and on weekends.

He advised people to mark their properties so that when they get stolen, they can be easily identified.

“I urge more people to help in crime prevention; it does not have an age limit and is a worthy cause! Shop owners should liaise with the police and get tricks on how to protect their shops and properties,” closed the living legend.

Advertisement. Scroll to continue reading.
In this article:Ghetto Diaries, The old guard