After working for over 40 years as a media and gender activist, Keabonye Ntsabane joined politics.

Recently she was given more responsibility when she assumed the Deputy chair position in the same council.

She is one of the founders of the Kagisano Women’s Shelter, which currently provides counselling for GB survivors in the country.

Ntsabane started working as a young woman at the Botswana Red Cross as a volunteer from 1977 to 1980.

She then became a youth officer at Botswana Red Cross from 1982 to 1985 and subsequently acted as Youth Director.

She later became a United Nations volunteer to lobby for Gender Equality at the Women’s NGO Coalition.

She also became the country manager at Gender Links, from 2009 to 2014 when she retired.

In 2018, she received the Presidential Honour Award in recognition of her selfless and exceptional contribution to the development of the country.

Our Reporter Portia Mlilo had a chat with this renowned gender activist about her passion for volunteerism and her political career.

Good Day Honourable what inspired you to join politics?

I have always encouraged women to participate in politics and contest for decision-making positions. Yes we can.

Politics is about our country’s development so when the other gender is not actively involved, there will be no balance.

When I was still a gender activist, women used to share their challenges in politics so I had a better picture of what to expect and an idea of how I could tackle the challenges.

You managed to defeat three men in the general elections, what was your experience during the campaign?

It was not an easy road. Your life changes completely.

It is all about the people.

I was very strategic and I realised that I won because I was dedicated and working hard during the campaign.

The other thing is you can be the best speaker at the freedom square but if the voters do not have confidence in you, you won’t win.

You don’t have to insult your opponents, just sell your yourself and your party manifesto and explain thoroughly why you would be the right candidate for the job.

It is always a concern that politicians never fulfil their promise, what’s your take on that?

There is no need to lie.

You are not elected to use your own resources to bring developments to the community.

Be consistent in giving voters updates and feedback after council meetings.

Do not wait until the next elections when you campaign again.

What does your role entail as the Vice Chair Sub Council?

I assist my Chairperson who is also a woman; honourable Semakaleng Sebogodi to implement council plans.

We hold meetings with all council members who bring motions and request for their ward’s developmental budgets, which we assess, against the council budget before approval and allocation of funds

Now back to when you were a gender activist, what was the Gender Links mandate?

The organisation basically advocates for women’s rights, gender and media participation of women in politics and addressing or fighting against GBV.

There shall be no discrimination on the basis of sex. When Gender Links started, we were not taken seriously.

We were called names and men said the organisation was destroying their marriages as women began to understand their rights better and to stand up against abuse.

We had a newspaper titled ‘Ke Nako’ covering women’s stories and sensitising our community leaders on GBV.

We did a Baseline Study in conjunction with the government on GBV cases.

We complied all the voices and published the research.

What were the challenges you faced as a gender activist?

I remember before there was a Women’s Shelter, a woman came to our office after she was hanged by her husband.

We did not even have a counsellor.

The husband said he no longer wanted her and she kept on saying she loved him and she could not accept divorce.

We talked at length until the woman accepted that the man was no longer interested.

I published a book titled, ‘Monate Botlhoko’ after a police officer shot and killed his wife at central police station.

It was a very painful story. We decided to have a shelter for abused women and went to South Africa with Dineo Mogapi to benchmark.

The Non-Governmental Organisations and the government rescued us and the shelter was built.

How did Gender Links come up with Botswana Media Gender Policy?

Media houses had their editorial policies.

There was a misunderstanding when we brought gender issues stories and the editors told us it was not part of their editorial mandate.

I think the introduction of gender policies in newsrooms has helped to have balanced stories because people used to think women were the only ones abused because men were not given a chance to share their side of the story.

It is only that women are mostly abused physically and there will be bruises and scars to prove it.

GBV then and today, are we winning the fight or we have regressed?

Back then, it was there but we did not register many passion-killing cases as compared to now.

We need to come up with other strategies to deal with it.

We can talk about it, make awareness campaigns but people need to change and deal with their attitude of anger.

I am a good example, I was married for 10 years with my husband Ntsabane whom I dearly loved but when things became sour, we divorced.

I am glad our First Lady Neo Masisi is actively sensitising the nation about GBV.

I see you are still much involved in gender issues and you have Keabonye Ntsabane Gender-Based Violence Association, what is its mandate?

After retirement, I started this association.

I volunteer to teach my community about GBV during kgotla meetings.

I do not offer counselling so I refer victims to the Women’s Shelter. I have the support of Kgosi Mosadi Seboko.

Every year I host elders aged 65 and older for Christmas a luncheon and Kgosi Mosadi advises that I invite other service providers like health care and participants for screening and tests for non-communicable diseases.

What are your future plans with this association?

My dream is to see this organisation growing and attracting more volunteers, especially youth who will continue the legacy when I retire.

I might have the passion but my kids are not so interested so the community will take over. 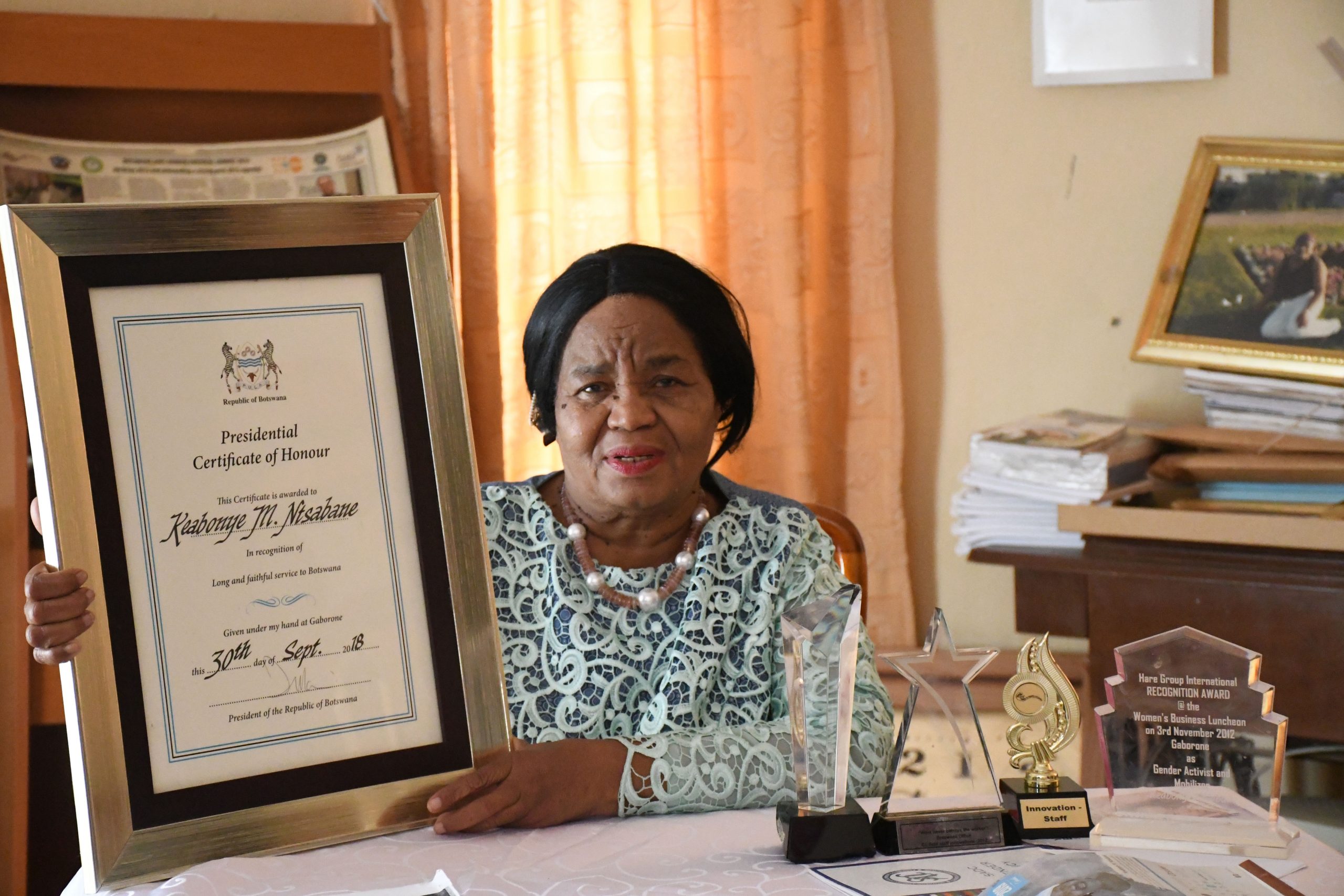 How does it feel to be honoured by the president?

I did not expect it and that is when I realised that some people out there were taking notice of the good work I do and the difference I make.

I was a volunteer for a very long time.

We used to wait at the bank month-end while the Red Cross was requesting for a loan to pay our allowances and they would then pay back the loan after receiving grants and donations.

Life was hard then and at some point when I was a temporary teacher, I used to use Chibuku cardboard boxes for cooking fire because I couldn’t afford firewood.

I always asked myself what I have done for this nation and the award is the answer.

I knew nothing when I joined Gender Links and she believed so much in me that she promoted me and I started Botswana and Mauritius satellite offices and ended up being a country Manager.

The late Beata Kasale Kabango is also one of my role models.

She gave me a platform to write stories on women in politics on The Voice Newspaper and helped me to compile stories of victims of violence.

Lastly, one of my role models is Louisa Mmusi.

Thank God it’s Friday, what are your plans for the weekend?

I will be hosting about 20 men who survive by doing piece jobs and selling firewood.

We hold meetings at least once a month to discuss issues that affect men including GBV and share ideas of how they can improve their lives.